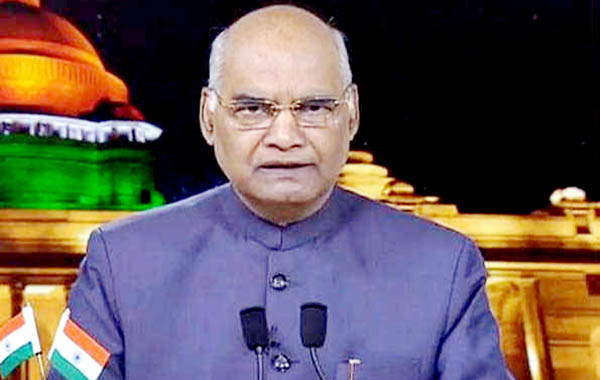 New Delhi, President Ram Nath Kovind on Tuesday said that India had inherited a rich legacy of remarkable patriots whose commitment to a ``free, sovereign, plural and egalitarian’’ India was absolute, but who also left unfinished tasks for the development of the society. Addressing the nation here on the eve of the 72nd Independence Day, Mr Kovind called upon youth to renew the resolve of filling up the gaps that remain in nation building -- of development of society, empowerment and liberation of the proverbial last person from poverty, social and economic inequality. Invoking Mahatma Gandhi, whose 150th birth anniversary celebrations commence on October 2, he said violence has no place in society. ``Perhaps Gandhiji’s most noble mantra was to point out that the power of ahimsa (non-violence) is far greater than the power of hinsa (violence). The power to stay your hand is far greater than the power to strike with your hand and hinsa has no place in the society. The weapon of ahimsa was the most effective weapon Gandhiji gave us.’’ he said. ``Like his other teachings, it was rooted in the ancient wisdom of India and yet has a resonance in the 21st century and in our daily lives,’’ Mr Kovind said. At the same time, the President emphasised that India stood at the cusp of achieving many long-awaited goals and contentious issues and extraneous debates should not be allowed to distract the nation. ``We are at a pivotal moment. We are at a juncture in our history that is very different from any period we have so far experienced. Universal access to electricity, the elimination of open defecation, the elimination of homelessness, the very elimination of extreme poverty is achievable and attainable,’’ he said. Stating that Independence Day was a celebration of the country’s sovereignty and the tricolor was a symbol of national pride, he said every citizen including farmer, soldier, police and para-military personnel, women, youth, young people, professionals, business can contribute in their own way to uphold the ethics of freedom much as the freedom fighters did. He urged students to spend a few days in a village as part of ``University Social Responsibility’’ to understand the country, participate in social welfare programmes and to invoke fervor of freedom struggle in identification of every citizen with the national mission. ``India belongs to the people of India - not just to the government. The government has a leading role but not the sole role. Let us use the government’s programmes and projects to further our own efforts. Let us make that sense of ownership our motivation,’’ he said.