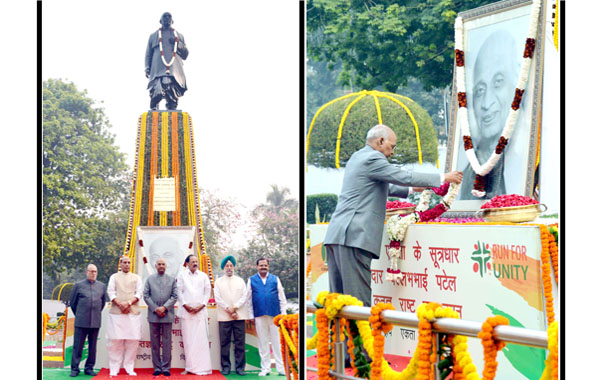 New Delhi, President Ram Nath Kovind on Wednesday led the Nation to pay tributes to Sardar Vallabhbhai Patel on his 143rd birth anniversary here. President, along with Vice President Venkaiah Naidu and Union Home Minister Rajnath Singh offered floral tributes at the statue of Sardar Patel here at Patel Chowk on the occasion of Rashtriya Ekta Diwas. Congress president Rahul Gandhi also paid tributes to sardar Patel.Minister of State for Housing and Urban Affairs Hardeep Singh Puri and Delhi Lieutenant Governor Anil Baijal also paid floral tributes at the statue of Sardar Patel at Patel Chowk. Taking to Twitter, the Congress president said, 'Sardar Patel was a patriot, who fought for a independent, united and secular India. A man with a steely will, tempered by compassion, he was a Congressman to the core, who had no tolerance for bigotry or communalism. On his birth anniversary, I salute this great son of India.' The Union Home Minister later flagged off the "Run For Unity" from Major Dhyan Chand National Stadium.