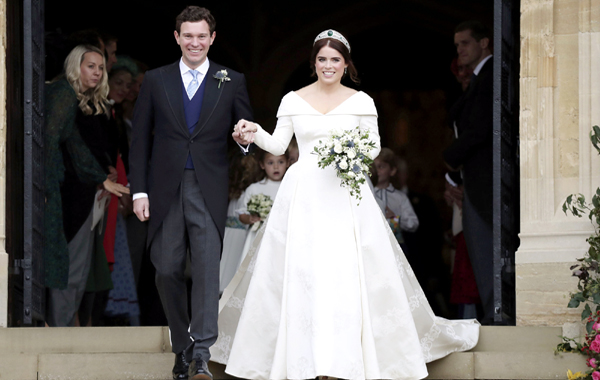 London, Princess Eugenie has married her long-term partner Jack Brooksbank at St George's Chapel in Windsor Castle.Around 40 members of the Royal family, including the Queen and Prince Philip, plus a number of celebrities attended the royal wedding on Friday,reports BBC.Everyone cheered as the newlyweds kissed twice on the chapel steps. Princess Eugenie kept breaking into a broad smile during the whole ceremony.Her dress was designed by Peter Pilotto and Christopher De Vos, who founded British label Peter Pilotto. It featured a neckline folding around the shoulders to a low back at the request of the bride, who wanted to show a scar from surgery to correct scoliosis when she was 12. She wore the Queen's Greville Emerald Kokoshnik Tiara, made by Boucheron in 1919, featuring brilliant and rose-cut diamonds, pave set in platinum, with six emeralds on either side. The couple travelled by carriage from St George's Chapel into Windsor, before heading for an afternoon reception hosted by the Queen in St George's Hall at the castle. It was estimated about 3,000 people gathered to cheer Princess Eugenie and her husband Jack Brooksbank.