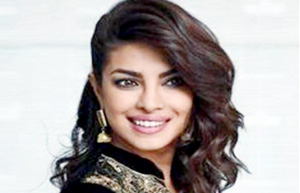 New Delhi, Bollywood diva Priyanka Chopra has signed a film opposite Chris Pratt. Though Priyanka Chopra is yet to make an official announcement about her film with Chris Pratt, the ‘Hollywood reporter’ has said in a report that the actress will play the role of Chris Pratt’s love interest in the film. Being directed by Michelle MacLaren (Game of Thrones), the film is based on the Image Comics graphic novel by A.J. Lieberman and Riley Rossmo. The film’s story revolves around a counter-intelligence unit formed by psychotherapist Dr. Sebastian Ghislain (Pratt) who transforms agents of three personas – a cowboy, a ninja and a viking. The film will hit the theatres on June 28, 2019. Trade sources said that Priyanka’s will also feature in ‘Isn’t It Romantic’, which will hit the theatres in February next year. She will also be working on The Sky is Pink with Farhan Akhtar.