Priyanka Chopra not reuniting with Salman Khan for Bharat. Will Katrina Kaif step in? 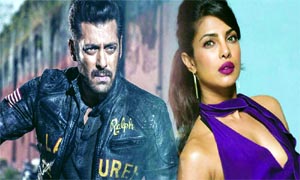 Actor Salman Khan has been shooting extensively for the last leg of Remo D’Souza high-action drama ‘Race 3’. Only a day ago, he was spotted on the sets along with co-stars Jacqueline Fernandez and Daisy Shah. And as per latest reports, after wrapping up Remo D’Souza’s film, the 52-year-old actor will take up Ali Abbas Zafar’s next project, titled ‘Bharat’. While the film is set to go on floors soon, reports say that Ali Abbas Zafar has still not finalised the leading lady opposite Salman. Earlier, it was speculation that Priyanka Chopra has been approached by the makers with the script of ‘Bharat’ and that the lady has apparently given her nod to the project. However, according to a report in Mumbai Mirror, Priyanka is longer a part of the team and the makers are now considering to cast Katrina Kaif for the role. The report further added that Zafar apparently wants to recreate the magic of his last release ‘Tiger Zinda Hai’ that starred Salman and Katrina together. However, there has been no official confirmation on the same. It is to be noted that this isn’t the first time when Katrina’s name is being speculated for the role. In fact, in February this year, buzz was there that Zafar had reportedly roped in Katrina for his film. However, the filmmaker took to Twitter to clear the air on the report. ‘Bharat’ is set to hit the screens on Eid next year.