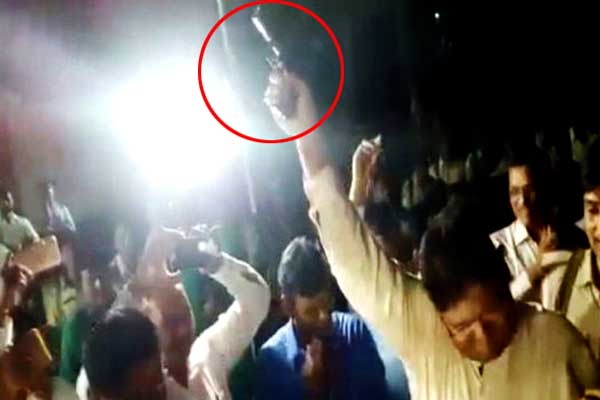 Agencies, Patna A high level probe was ordered today against a senior IPS officer and Katihar’s police superintendent Siddharth Mohan Jain after a video showing him firing 10 shots in air during his farewell party became viral on social media. State additional director general of police (Headquarters) S K Singhal said that inspector general of police (Darbhanga zone) would probe the incident, in which Mr Jain was found firing in air. He said that the state headquarters also cancelled ‘movement order’ of Mr Jain, who was supposed to join CBI after he was sent on central deputation in the recent reshuffle of IPS officers. He said that the state government had also been accordingly informed. In video, Mr Jain is seen pulling out his service pistol and firing in air. He fired till the magazine of the pistol was completely empty. Mr Singhal said that Mr Jain’s conduct was completely unacceptable and gross violation of the service of the code of conducts as he fired shots in air during his farewell party. The incident had taken place yesterday evening during a farewell party jointly organised by the Katihar district administration and police association at the Railway Golf Grounds for Mr Jain and outgoing Katihar district magistrate Mithilesh Mishra. The Katihar SP, Siddharth Mohan Jain was getting transferred to Delhi to the Central Bureau of Investigation (CBI).District Magistrate (DM) Mithilesh Mishra was also getting transferred as well. A farewell ceremony was held in the honour of the duo, which was attended by senior officers of the district.In a video that surfaced, SP Jain and Mishra were seen happily enjoying their farewell party. The latter was singing a song from the 1975 hit Sholay film - ‘Ye Dosti Hum Nahi Todenge’. It was then the Katihar SP started firing bullets in the sky in a jubilant mood. He kept on firing till the magazine of the pistol was completely empty.