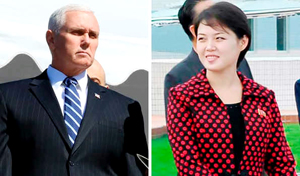 Seoul, US and senior North Korean officials say US vice-president Mike Pence and Northy Korea's Kim Jong-un’s younger sister Kim Yo-jong have ‘no intention’ of meeting each other at the Winter Olympics – even though Mike Pence and Kim Yo-jong will be seated just metres apart at the opening ceremony, a report in The Guardian on Thursday said. Friday’s VIP seating arrangements are seen as a “protocol headache” for the South Korean hosts, who have been pushing for the Games in Pyeongchang to be known as a “peace Olympics”. Instead, the opening ceremony could prove to be an awkward and frosty affair. Pence is to be accompanied by the father of Otto Warmbier, the American student who was imprisoned by North Korea and died just days after being returned to the US in a coma last year. North Korean leader Kim Jong-un’s younger sister, Kim Yo-jong, is blacklisted under US sanctions. She oversees the regime’s propaganda department and has been playing an increasingly prominent role in the ruling Workers’ party. It is speculated that she might carry a message from her brother to the South as she becomes the first member of the immediate family to cross the border between the countries that are technically still at war. In a further sign of rapprochement, a spokesman for the South Korean president, Moon Jae-in, said he would meet and have lunch with the North Korean delegates on Saturday. But in a show of strength likely to increase tensions just a day before the Winter Olympics open in the South, the North Korean regime staged military parade in Pyongyang. Footage posted online showed truckload after truckload of soldiers being driven away from the city centre after taking part in the parade, with cheering onlookers lining the streets, followed by tanks and other armoured vehicles. Some observers have suggested that the North is trying to drive a wedge between South Korea and its American ally.Pence, who will lead the US delegation, has vowed to prevent Kim from “hijacking the message and imagery” of the Olympics. “We’ll be there to cheer on our American athletes, but we’ll also be there to stand with our allies and remind the world that North Korea is the most tyrannical and oppressive regime on the planet,” Pence said on Wednesday. “We will not allow North Korean propaganda to hijack the message and imagery of the Olympic Games. We will not allow North Korea to hide behind the Olympic banner the reality that they enslave their people and threaten the wider region.” Before travelling to South Korea, Pence said the US would soon unveil “the toughest and most aggressive round of economic sanctions on North Korea ever” in a bid to pressure it to abandon its nuclear ambitions. He told American troops in Japan that the US was “ready for any eventuality”.