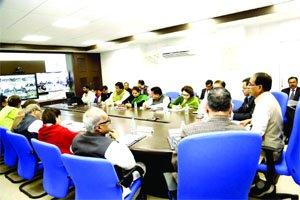 Chronicle Reporter, Bhopal Chief Minister Shivraj Singh Chouhan while extending New Year greetings to all the Divisional Commissioners and District Collectors today, directed them to prepare effective schemes by giving new energy to the priorities of various departments. He said that all the departments must establish coordination among them. Take resolve to make Madhya Pradesh, the best state of the country by providing maximum benefit to the citizens. Chouhan instructed all the collectors and superintendents of police to adopt strict stand against criminals by working in coordination. Do not accept any kind of interference while handling criminals. Deliberating with the District Collectors and Divisional Commissioners through video conferencing at Mantralaya today, Chouhan mentioned that the fixed priorities of the departments should be implemented effectively at ground level. Describing the priorities of Panchayat and Rural Development Department, Chouhan congratulated all the districts for securing first position for Madhya Pradesh in the implementation of Pradhan Mantri Awas Yojana. He told the collectors to make preparations to achieve new target. House warming programmes should be organized for those families who have received the houses. The second installment of the construction should not be delayed. Make preparations to declare all the districts open defecation free till October 2. Moreover, keep arrangements to provide employment for 150 days in place of 100 days in drought affected districts. CM Chouhan gave instructions for conducting a Jalabhishek campaign from April 02. He told the district collectors to ensure complete safety of saplings planted on the banks of Narmada River during the Narmada Seva Yatra. Take measures to moisturize saplings by preparing a special action plan specially during the summer season, he added. Discussing about the priorities of the Revenue Department, CM Chouhan mentioned that the same speed should be maintained to resolve revenue cases. Second round of the campaign will be started from January 6 from Hoshangabad to resolve the revenue cases. A campaign to distribute pattas is being started from January 26. A target to construct 5 lakh residential units has been set this year in the urban development areas. Moreover, he gave instructions for effective implementation of Deendayal Rasoi Yojana. Under the Bhavantar Bhugtan Yojana, the programme for payment of Rs. 900 crore towards Bhavantar rashi will be organized in grand form. He further said that the Union Governmnet has shown interest in the implementation of Bhavantar Bhugtan Yojana. The entire country has eyes set on Madhya Pradesh. This scheme has proved to give new direction to the country. Hence, no paucity should come in the way of the implementation of this scheme. In connection with Renewable Energy, Chouhan directed the collectors to make efforts for maximum use of LED bulbs in the villages. At Present, Madhya Pradesh is leading in the country for use of LED bulbs. Moreover, regarding Horticulture, Chouhan informed the collectors that the payment from February will be made to those farmers, who have planted fruit bearing trees in their fields on Narmada banks. In connection to the Civil Supplies department, Chouhan said that food grain slips should be given to all the eligible beneficiaries living below the poverty line with immediate effect. Benefit of Soubhagya Yojana should be provided to all the houses. While discussing about Rs. One thousand per month to the woman of each family for eradicating malnutrition among the special backward tribes, he informed that this amount will be paid to the women of Sahariya, Baiga and Bhariya tribes. Mentioning about the priorities of Social Justice Development, Chouhan said that the Mukhya Mantri Kanya Vivah and Mukhya Mantri Nikah Yojana should be organized in a better way. Any kind of complaint is not acceptable in implementation of these schemes. He gave instructions for organizing special programmes for divyangs. Talking about the priorities of Commerce and Industry, CM Chouhan told the collectors for their full cooperation in providing concessions to the industries. Organise block and district level conventions for the beneficiaries of Mukhya Mantri Swa-Rozgar Yojana, Mukhya Mantri Yuva Udyami Yojana, Mukhya Mantri Arthik Kalyan Yojana and Mukhya Mantri Krishak Udyami Yojana. The convention of young entrepreneurs is proposed in the month of March. Chouhan said that a target has been set this year to make 7 lakh 50 thousand youths as entrepreneurs and district administration should extend full cooperation in this matter. In connection to the Mining, Chouhan said that revenue from the sand mining is not the motto of the state government but local people should get employment from the sand mining. Moreover, reckoning the priorities of Public Works department, he gave instructions to the district collectors that to undertake regular repair of the roads of their districts and to ensure necessary preparations for the Chambal Express Way. Discussing about the prime priorities of the Water Resources department, Chouhan said that the provision of irrigation facility to every agriculture field is the major and prime target. While instructing to complete the work-plans of Narmada Valley Development Authority within the stipulated time limit, the Chief Minister said that the Narmada Jayanti will be celebrated with full jubilation on January 24. All the ministers will gather on the banks of the river Narmada. Inauguration of sewage treatment plants, ghats’ construction and construction of places to immerse pooja material and other construction works will begin on the same day. Saplings will be planted on July 2, he added. Regarding priorities of Health, Chouhan praised the initiative of Bhind District Administration for transforming Bhind District hospital into a model hospital. He mentioned that all the district collectors should make tireless efforts in their respective districts in this direction. CM Chouhan stated that convention of women self-help groups will be organized. While giving instructions for conducting a signature campaign with the cooperation of the society for Beti Padhao-Beti Bachao, he said that this campaign will conclude on March 8. He gave instructions for organizing programmes in government and private schools to give information about the Mukhya Mantri Medhavi Yojana.