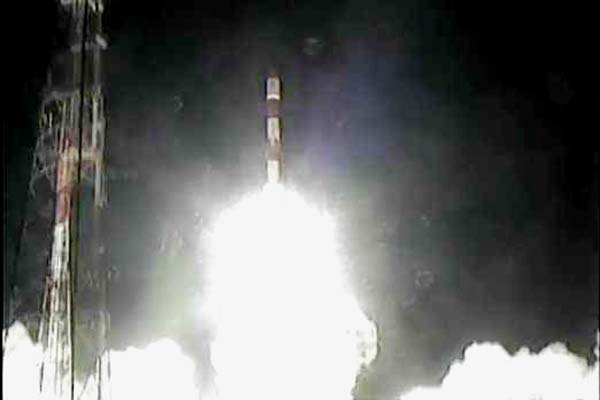 Sriharikota, In its 43rd flight, ISRO’s Polar Satellite Launch Vehicle PSLV-C41 successfully launched the 1425 kg IRNSS-1I Navigation Satellite on Thursday from Satish Dhawan Space Centre SHAR, here. After the 32-hour countdown, the PSLV-C41 lifted off at 0404 hrs as planned from the First Launch Pad. After a flight duration lasting about 19 minutes, the vehicle achieved a Sub Geosynchronous Transfer Orbit with a perigee (nearest point to earth) of 281.5 km and an apogee (farthest point to earth) of 20,730 km inclined at an angle of 19.2 degree to the equator following which the IRNSS-1I separated from PSLV. After separation, the solar panels of IRNSS-1I were deployed automatically. ISRO's Master Control Facility (MCF) at Hassan in Karnataka took over the control of the satellite. In the coming days, orbit manoeuvres will be performed from MCF to position the satellite at 55 deg East longitude in the planned Geosynchronous Orbit with an inclination of 29 deg to the equator. Congratulating the ISRO scientists, Chairman Dr K Sivan termed it as a perfect launch and said the satellite was injected into the precise orbit. He said ISRO has broken its own history of launching its second mission in a short gap of 14 days after the GSLV-Mk II mission on March 29 when GSLV-F08 successfully launched GSAT-6A Satellite into Geosynchronous Transfer Orbit, though the satellite lost its contact with the ISRO Control Centres after two orbit raising manoeuvres. Asked about the present status of GSAT-6A, Dr Sivan said ISRO was able to locate the satellite and its movement. He said the space agency was gearing up for a lot more launches in the next eight months of this year, including the second Lunar Mission. 'We will be launching the GSAT-29 satellite using the GSLV Mk-III rocket (carrying the indigenous cryogenic engine) and also GSAT-11, besides PSLV launches and the second moon mission Chandrayaan-II towards the end of the year', he added. IRNSS-1I was the latest member of the ‘Navigation with Indian Constellation (NavIC)’ system. NavIC, also known as Indian Regional Navigation Satellite System (IRNSS), was an independent regional navigation satellite system designed to provide position information in the Indian region and 1500 km around the Indian mainland. A number of ground facilities responsible for IRNSS satellite ranging and monitoring, generation and transmission of navigation parameters, satellite control, network timing, etc., have been established in many locations across the country as part of NavIC. Till now, PSLV has successfully launched 52 Indian satellites and 237 customer satellites from abroad.