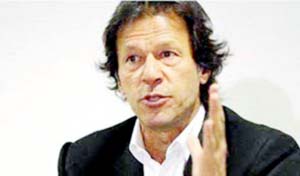 Islamabad, Pakistan Tehreek-i-Insaf (PTI) chairman Imran Khan has slammed media for portraying ousted former prime minister as 'innocent' saying that he plundered billion of rupees from the national kitty. Why such journalists are not thinking about the future of their children rather than trying to save a criminal? Pakistan daily Dawn quoted him as asking. While addressing a gathering at the Dhobi Ghat ground on Sunday, he said it took him 22 years to make the people realise that corruption had destroyed the country's economy leading to price hike and increase in the foreign debt manifold. “Foreign debt of the country was Rs 6,000bn a decade ago which was now Rs 27,000bn and the masses have to pay the price for the debt as the PML-N government had imposed taxes to pay the installments of the debt,” he said. Imran raised questions over utilisation of the debt, asking whether any dam was built with it.He said the salary of a person was Rs 2,00,000 in the US and Britain but in Pakistan it was getting only Rs 15,000. Per unit price of electricity was Rs 2.13 a decade ago, while it was Rs 9.86 (an increase of 400pc) now, per unit gas price also increased from Rs 150 to Rs 573 which had badly affected the textile sector. Addressing a public rally at Mai Heer Stadium at Jhang, Ms Khan alleged that the PML-N had introduced and strengthened the commission mafia and a corrupt governing system. He made a pledge that the PTI government would introduce a comprehensive public-friendly local government system as a better local bodies system was the key to change the lives of people. “The maximum resources were spent for corruption-based development projects by ignoring the needs of the people living in small cities of Punjab. Multan Metro Bus project is a proved example of corruption.” Criticising former Chief Minister Shahbaz Sharif for making the police corrupt, he said the PTI had a plan to make department non-political and change thana culture. He said that after coming into power, his party would introduce real democracy, empowering public institutions and the masses would be involved in making decisions for development projects. “The state resources will be distributed equally to small towns and cities during his rule,” the PTI chief added.