Pucca Houses to be given to all labourers within next 4 years: CM 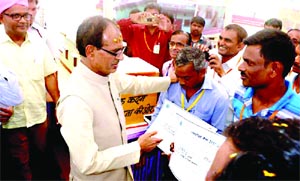 Chronicle Reporter, Bhopal Chief Minister Shivraj Singh Chouhan has said that the state government has prepared several important schemes for the welfare of labourers. An amount of Rs. 4 thousand will be given to pregnant woman labourers for nutritious food. A sum of Rs. 12 thousand 500 will be deposited in the bank accounts of the women after the delivery. A financial assistance of Rs. 2 lakh in case of normal death and Rs. 4 lakh in case of death due to accident will be given, if any labourer dies before attaining the age of 60. Chouhan was addressing the people present at the block level Antodaya Mela organized at Sohagpur today. Chouhan said that plots and houses will be given to each landless labourer. Pucca houses will be given to all the houseless persons and labourers within next 4 years. The state government will bear education fee from class to Ph.D of all the children of the labourers or for medical and engineering courses, Medical treatment of labourer will be provided in the government or private hospital, if he/she falls seriously sick. He further mentioned that monthly electricity charge at the flat rate of Rs. 200 will be charged from the labourer families. A sum of Rs. 5 thousand will be given for last funeral rites in case of death of labourer.This amount will be made available in all the gram panchayats. Chief Minister stated that he has a target in life to ensure smile on the face of poor by transforming their lives. He said that he will achieve his target at any cost. Chouhan said that conventions for the welfare of poor will be organized in the coming days. Pattas will be given to those labourers, who do not own land. Registration of manual labourers will be undertaken from April 14. Gram Panchayats in rural areas and nagar panchayats in urban areas will undertake labourers registration. CM Chouhan made announcement at Antodaya Mela to construct stop dam on Palakmati river. He assured upgradation of Semriharchand police post and proper action to open a girls school after the survey. Chouhan administered pledge to the vast gathering of people for not to burn stubble, to consider son and daughter as equal and to educate every child of the village. On his tuladaan by the farmers, Chouhan said that he will not let the dignity of the farmers hurt by any means. Chief Minister Chouhan said that condition of road is better in the state. The government has constructed roads from village to village. Irrigation capacity in the state has been increased to 40 lakh hectare. The Chief Minister told the farmers not to get confused by any one. Rs. 200 per quintal on wheat and Rs 200 per quintal for paddy will be deposited in accounts of farmers on April 16 by the state government. If farmer sells his wheat on minimum support price or outside, he will be given Rs 265 additionally under Kisan Samriddhi Yojana. If farmers sell gram, masoor or mustard on minimum support, he will be given Rs 100 per quintal additionally. During the programme, Chief Minister Chouhan gave away material to beneficiaries under different schemes, equipment and certificates for grant schemes. Local MLA Vijaypal Singh feted the Chief Minister by presenting shawl, shriphal and memento. Assembly speaker Dr Sitasharan Sharma, MLA Sartaj Singh and Thakure Das Raghuvanshi, Apex Bank Chairman Ramakant Bhargava, District Panchayat President Kushal Patel, Mineral Development Corporation Chairman Shiv Choubey, Warehousing Corporation Chairman Rajendra Singh and other public representatives were present on the occasion. Benefits worth Rs 55.19 crore distributed to beneficiaries: Chief Minister Chouhan distributed benefits worth Rs 55.19 crore to 13349 beneficiaries under different scheme in Antoday Mela. Grant amount, material and equipment were distributed as benefits. The Chief Minister dedicated 182 development works worth Rs 722.82 lakh and performed Bhoomi Pujan for 163 works worth Rs 16472.68 lakh on the occasion.