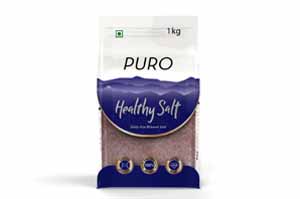 Startup India recognized company that promises a healthy lifestyle without compromising on taste & budget. India – Burden of Hypertension As per latest studies published by Journal of the Association of Physicians of India Salt intake in India is estimated to be more than double the recommended maximum of 2000 mg sodium (5g salt) /day set by World Health Organisation. Excess salt consumption is estimated to cause about 6,00,000 deaths each year and to be the 5th leading cause of death in India due to its direct link with Heart attacks & Stroke. Additionally, Indians mostly consume refined salt that is high on sodium (above 39 g/100 g) with absence of minerals. A proven salt secret – WHO Finland case study Finland started a successful salt replacement campaign in 1970 in North Karelia by replacing common salt with a mineral fortified salt, both in home kitchens and food industry. This resulted in deaths from stroke & Cardiovascular disease plummet 60% by 2002. It is interesting to note that smoking & alcohol consumption had gone up significantly in the same period as per the study. These research findings were presented to WHO in 2002 after which the impact of white salt got noticed by the world. http://www.tahomaclinic.com/wp content/uploads/2012/07/Introducing-Wright-Salt.pdf Harvard Health Publishing report emphasizes Sodium intake reduction in America. In fact, the FDA just recommended voluntary sodium reduction targets for the food industry. USA is lagging behind other countries like the United Kingdom and Japan, which have set targets for sodium in processed foods and seen reduction in blood pressure and deaths from stroke and heart disease. India too, has pledged to WHO for taking measures to reduce sodium content by 30% in daily intake by 2025. https://www.georgeinstitute.org.in/media-releases/urgent-need-for-action-plan-to-reduce-deadly-salt-consumption-in-india The current situation of salt in India – A mere by product of soda ash factories.The salt consumed in India is a mere by-product of soda ash factories. The sea water is primarily required for steam to make soda ash. The result is a by-product which is bleached through extreme pressure/heat that strips it of any minerals naturally present. Additionally, it is highly processed and refined with anti-caking agents such as E536 (Potassium Ferrocyanide) added to prevent lumping of salt, which is banned in USA. The quantity of such anti-caking agents is equivalent to the quantity of Iodine in the salt. While iodization is a positive move, adding such anti-caking agents leads to many side effects in the long run. A recent guardian report also found most salts in Asia-pacific region sourced from the sea contaminated by plastics. https://www.theguardian.com/environment/2017/sep/08/sea-salt-around-world-contaminated-by-plastic-studies Nutrition deficiency & India – A major challenge Due to lack of minerals in such salts, FSSAI has been encouraging double fortification of salt with Iodine & Iron. Refined double-fortified salt launched in India had to be withdrawn because of technical issues with the product which changed the colour of food to black/violet/blue etc. while cooking/sprinkling. However, Unrefined salts have these necessary minerals naturally present. The natural affordable solution inspired by ancient wisdom Adhering to the need of the hour, Puro Wellness Pvt. Ltd. has launched its first clean label product, Puro Healthy Salt –– a 100% Natural, chemical-free, Unrefined salt with 84 minerals naturally occurring making it the healthiest salt for holistic wellness. In fact, leading salt manufacturers have also launched this mineral rich salt for over Rs. 300/kg which is beyond the reach of the average Indian family. Moreover, they come in the form of crystals, which are inconvenient for daily kitchen use as they have to be ground manually at home. Puro healthy salt comes as the only brand available as fine-grain for daily use at less than 1/3rd the cost. The truth about white salt and the benefits experienced through mineral salts has driven health conscious audience in India to shift their consumption leading to the growth rate of unrefined salts being double than that of white iodized salts as per a report on Edible salt market by a leading research agency marketdataforecast. While using this salt has become a norm in rich and elite families, it could not reach the masses. Puro aims to be the first brand which could be easily affordable for the masses at just Rs. 99 per kg available across kirana stores in the country.