Pursuit of Excellence should inspire minds of future generations, President says at University of Cyprus 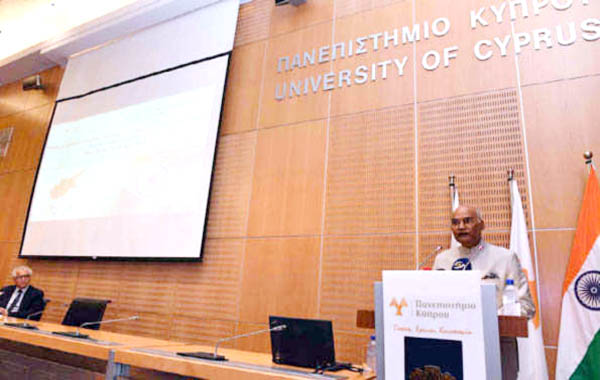 New Delhi, The pursuit of excellence should be the key factor that dominates the minds of future generations, President Ram Nath Kovind said on Tuesday while delivering an address at the University of Cyprus. According to a press note issued here, he said, 'Technology has opened a whole new world of learning. It has also made it easier to accomplish our tasks. One should, however, not get carried away by the instant nature of technology.' Noting that for the first time in history youth were directly involved in bringing about sweeping changes on such massive scale, he said, 'We live in a rapidly evolving world. The scale of change we are likely to see in a decade or so will be unprecedented in human history. The world of technology, start-ups, innovations, new ideas, digital assistants, clean energy and pasta straws would reorient our daily lives in an unbelievable manner.’’ The President said the changing world demands greater collaboration among the global community. We must create open source platforms for communities and countries to access the fruits of science and technology. Access, equity and inclusion should remain key to developing and deploying technologies. The Indian experience is of relevance. Empowerment through digital access is an objective that the Government of India is committed to. Emphasising the challenge of managing climate change and environmental stress, he said, 'This amounts to dealing with variability in weather patterns, flash floods and forest fires. The severity might be far more serious for future generations. The problem is not insurmountable. By adding sustainability to development, by preserving forests, respecting ecology and by adopting clean energy options, we can tackle climate change. On this count, India has taken the lead through the International Solar Alliance.' Appreciating that ``as two ancient cultures’’, India and Cyprus had lived in harmony with nature for centuries, he said it was time to bring sustainable practices into modern lives. ``New age technology combined with the wisdom of the past can solve many of our ecological problems.’’ Following the conclusion of his visit to Cyprus, the President left for Bulgaria on the second leg of his journey to three European nations – Cyprus, Bulgaria and the Czech Republic. He will later address the Indian community in Sofia.