Push in manufacturing to make India a $5 tn economy: Prabhu 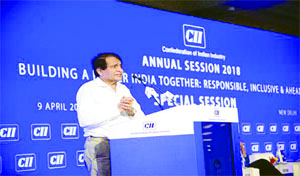 Agencies, New Delhi Commerce Minster Suresh Prabhu on Monday said India will be a five trillion dollar economy. However, for India to be a five trillion dollar economy, manufacturing must also increase. Speaking at an event organised by the Confederation of Indian Industry here Mr Prabhu said trade can only happen once products are manufactured. India must produce and increase the scale of the production to increase its share in the global economy he said. He also expressed the hope that in India, services will be exported more than merchandise goods in times to come. Commenting on the present situation in the global economy, Mr Prabhu said that with the recent measures taken by countries affecting global trade,” we might be living in a new normal.” He said post the establishment of the World Trade Organization (WTO), in recent times, people were questioning globalization and different definitions of globalization are emerging. “India must face the challenge and convert it to an opportunity. India must take the lead and take advantage of globalization,” Mr Prabhu said. After the inconclusive conclusion of the 11th WTO Ministerial, he said that the global community appreciated the effort by India in organizing the Mini Ministerial. Turning to Standards, Mr Prabhu underlined the importance of Standards and said that the Commerce Ministry is working on developing standards for all products. He asked Industry to share with the Ministry what regulatory issues are affecting industries. He also said that inputs are being solicited from start-ups as existing laws were not made with Start Ups in mind. He also added that the Commerce Ministry is working on bettering Ease of Doing Business at the district level. Turning to the tax-GDP ratio, an increase in the ratio will lead to a decline in tax rates and the Government will have more resources to spend. Mr Prabhu also said there exists an opportunity for growth in air cargo and given the increasing demand for aviation in this country, there exists an opportunity for the growth of aerospace manufacturing in the country .