Qayamat Ki Raat' is not a regular saas-bahu type, but much good content:Karishma Tanna 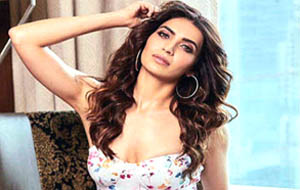 New Delhi, Actress Karishma Tanna, who is gearing up for Star Plus new show ‘Qayamat Ki Raat’, said the content of the show is different and it’s not a regular ‘saas bahu type’ which is why she accepted the offer.Karishma Tanna has returned to the Balaji camp after a long gap. Talking to agencies, Karishma said, “ It's because of Balaji I said yes to the show. The content is also good,different. It is not like a regular daily soap or 'saas bahu types'. So I wanted a change that's why I did this show.” Karishma, who is also currently doing ‘Naagin 3’, which is also based on supernatural elements like ‘Qayamat Ki Raat’, when asked was it a conscious decision to take the same genre, said,” It's not a conscious decision. Neither I would say that I only like this genre. I like normal drama, thriller, romance.I like all kinds of genres.” “Basically an actor has to feel that the character given to him/her will be performed well by them. The content should be strong,the actor should feel happy to do the role.And when I feel that then I accept the role and take up that show,” the ‘Kyunki Saas bhi kabhi bahu thi’ fame actress said. Telling about the USP of the show, Karishma said,”It is the ‘Tantrik’. How he doesn't have his body with him and how he tries to join it. That's the whole drama.” The show will be aired at 1900 hrs time slot on Star Plus. When asked if the time slot will affect the TRPs of the show, Karishma said,”many times 2100 hrs and 2200 hrs time slot also goes dead. Sometimes stars doesn't match. It is not like our show is coming at 1900 hrs, so it will be all dead.” “We are trying something different. And we have tried that the show doesn't becomes much horror, so that children are not able to watch it. We have tried something new and this is an experiment for all of us. I am hoping that everything is positive and we get good TRPs,” the actress said. On asking if she gets affected by the TRP/box office numbers, Karishma said ofcourse she does.“We are giving our best. Working for around 12 hrs for a show and if then we do not get positive results then we feel bad,” she said. On asking whether Indian TV shows is lacking behind foreign ones, Karishma said,”we are not lacking anywhere but we are only lacking with time. We don't have enough time. When we see foreign shows like Game of Thrones (GoT) --there shooting pattern is very different. They shoot entire season for an year and then telecast it while we shoot everyday and keep on broadcasting. So, there the difference lies.” Asking what kept her going in the industry, Karishma said it’s her positivity.“People love me and that's why I am here,” she said. Karishma said she sees herself as very successful,a star, nicely married with a good career after five years. Telling how useful social media is for her, Karishma said,”it's definitely useful. Earlier social media was not so high and big but now it has become so big that we actually get to endorse so many things on social media. It has become very strong and whatever one uploads it becomes viral.” The actress also told that she likes romantic genre the most.“I think doing good content is a big thing whether it is a small/big role,” she said.Karishma said she loves web series.“If anything good comes up, I would definitely do it,” she added. ‘Qayamat Ki Raat’ is an upcoming finite fiction supernatural drama television series which will start from June 23 on Star Plus and will air on weekends at 1900 hrs. The series is co-produced by Ekta Kapoor and Shobha Kapoor under their banner Balaji Telefilms. The show will star Vivek Dahiya, Karishma Tanna, Dipika Kakar, Manasi Salvi, Daljeet Kaur,Riddhi Dogra, Fenil Umrigar and Nirbhay Wadhwa in the lead roles.