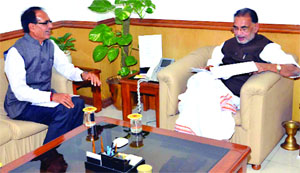 Chronicle Reporter, Bhopal Chief Minister Shivraj Singh Chouhan met Union Minister for Agriculture Radha Mohan Singh at New Delhi today. The Union Minister Singh wholeheartedly praised the Bhavantar Bhugtan yojana, being implemented in Madhya Pradesh to protect the interest of the farmers. He said that this is a best scheme to provide fair value to the farmers for their agriculture produce. Other states should imitate schemes being implemented in the agriculture sector in Madhya Pradesh. Singh also congratulated Chouhan for receiving Krishi Karman Award for consecutive 5 years. Apprising Singh about the problems emerged from the bumper agriculture production in the state, Chouhan said that a big decline has been recorded in the prices of agriculture produce due to the bumper production and the farmers are not able to get reasonable prices. The state government has started Bhavantar Bhugtan Yojana to solve this problem. He informed that the difference amount between the minimum support price and market price is being deposited by the state government directly in the bank accounts of the farmers. Moreover, Chouhan also discussed with the Union Agriculture Minister on the issue of G.I. Basmati rice being produced in the state. He said that the farmers are unable to get correct price of the rice in absence of the tag. Chouhan urged him that keeping in view the farmers’ interest, the union government should take proper action in this connection. Union Ministers of State Puroshottam Rupala and Gajendra Shekhawat were also present during the meeting.