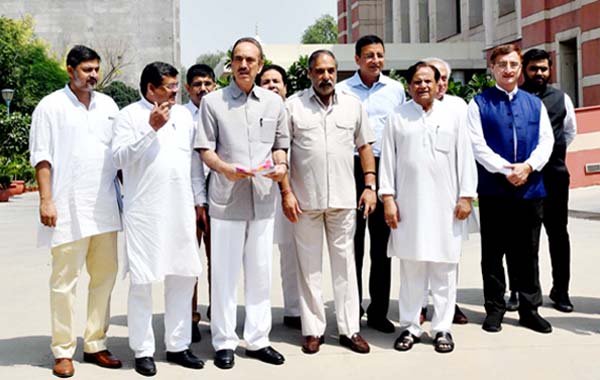 New Delhi, Intensifying the attack on Narendra Modi led NDA government over the controversial Rafale fighter jet deal, the Congress party on Wednesday approached Comptroller and Auditor General (CAG) and demanded a probe into the irregularities on the entire deal. The delegation comprising leaders Gulam Nabi Azad, Motlilal Vohra, Ashok Gehlot, Ahmed Patel Jairam Ramesh, Randeep Surjewala, Anand Sharma, Rajeev Shukla and Mukul Vasnik met CAG officials and handed over a eight page memorandum and documents related to the deal. "We submitted a detailed memorandum, along with documents which is clearly establishing the irregularities in Rafale contract. We hope that the CAG will look into the matter", said Anand Sharma after the meeting. Congress has alleged corruption of Rs 59,000 crore over the Modi government's decision to buy 36 Rafale fighter jet from France's Dasault Aviation. It says Modi government's decision to buy 36 Rafale fighter jet by paying a higher price than what was negotiated by the UPA government is to 'protect the interest of particular business groups'. On Tuesday, former Defence Minister and senior Congress leader AK Antony had alleged Defence Minister Nirmala Sitaraman of 'suppressing facts' and demanded to reveal the details of the deal by the NDA government and the UPA governement including the prices of the aircraft. Congress spokesperson Randip Singh Surjewala also said that the CAG and Central Vigilance Commission (CVC) are constitutionally bound to probe the entire deal, whether somebody demanded it or not.