Rafale will be the last nail in the coffin of BJP: Congress 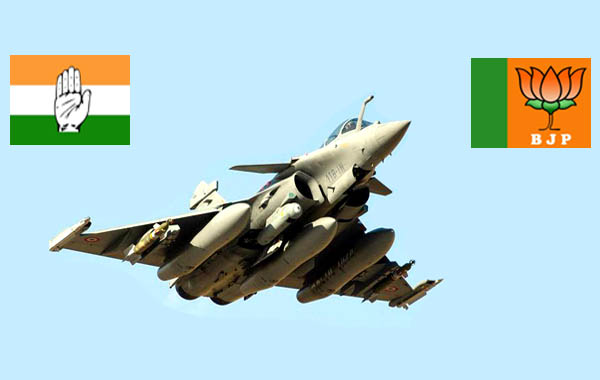 Congress is preparing to bear down BJP through Rafale deal issue in elections Pravesh Kumar Mishra New Delhi: In the upcoming Assembly elections of three states including Madhya Pradesh, the Congress Party will unleash the policies of the state Governments as well as by making the Rafale Deal as a main electoral issue by revealing the reality of Prime Minister Narendra Modi and BJP about ‘will not eat and let other eat’ (Na khaunga na khane dunga). A senior party leader said that the real face of Modi government has been exposed in Rafale case. There is nothing left to save the BJP and its government. That’s why the party will take this issue in front of general public. The leaders of the party believe that the people of Madhya Pradesh, Rajasthan and Chhattisgarh have already rejected the Governments before the election. But the manner in which the alleged clean image of Narendra Modi is stained in the Rafale deal. This will play a role of last nail in the coffin of BJP. The Congress strategists believe that Modi verses politics of the states was always remained in the assembly elections which have been held in almost all the states in the last few years. In such, BJP will try to move forward with the same policy in the said three states. Therefore, Congress party is alert and efforts are being made to reveal the truth of the corruption of Rafale deal in front of people of every village. This time people will not accept the arguments of BJP and Modi on the Rafale issue. At the same time, Congress Party is preparing Blueprint for the 2019 Lok Sabha elections. It will sustain the issue of Rafael deal primarily to attack directly on the ruling party in the Lok Sabha election. The party has begun its fight to bring this issue on the streets now. Under this strategy, the Congress will protest at district level from 7 to 15 September and after that it will agitate Dharna against the government at the state level from 16th to 30th September. Party strategists believe that the kind of formal evidence which has been revealed this time against Modi, it would be imperative to say that the BJP has trapped itself in its own trap. Rafale will give great power to the country As Supreme Court has accepted to hear the PIL against Rafael on one hand, Indian Air force has also told accepted that this deal is unprecedented. According to Indian Air force, Rafale is magnificent aircraft which will give Indian forces an unprecedented ability to fight. Air force’s vice chief air marshal SB Dev says that those who criticize this deal should understand its criteria and the purchase process. On the deal of 58 thousand crores, Government is on the target of opposition now. Air marshal informed that it is very beautiful Aircraft. This is very capable and we are waiting to fly this.