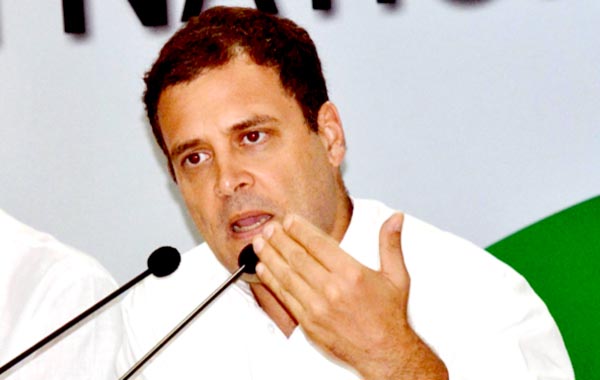 New Delhi, In a strong attack on Prime Minister Narendra Modi on Home Ministry’s notification allowing 10 intelligence and investigating agencies and the Delhi Police to intercept, monitor and decrypt any information generated, transmitted, received or stored in any computer, Congress president Rahul Gandhi on Friday charged him with “converting India into a police state”. “Converting India into a police state isn’t going to solve your problems, Modi Ji. It’s only going to prove to over 1 billion Indians, what an insecure dictator you really are”, he said in twitter. The NDA government on Thursday issued the order authorising 10 agencies, such as Intelligence Bureau, Narcotics Control Bureau, Enforcement Directorate, Central Board of Direct Taxes, Directorate of Revenue Intelligence, Central Bureau of Investigation; National Investigation Agency, Cabinet Secretariat (R&AW), Directorate of Signal Intelligence (For service areas of Jammu & Kashmir, North-East and Assam only) and Commissioner of Police, Delhi, to monitor electronic device. Earlier in the day, other Congress party and senior leaders also came out with sharp criticism and said Mr Modi’s move is unconstitutional and violating the fundamental rights of privacy. The Congress party responded in its official twitter handle that “from Modi Sarkar to Stalker Sarkar, clearly the string of losses has left the BJP government. Desperate for information”. Former Union Minister Anand Sharma responded that “It is the ultimate assault on the fundamental rights and right to privacy. It is also direct conflict with the Supreme Court judgment, that right to privacy is fundamental right”. “Sweeping powers given to agencies to snoop phone calls and computers without any checks and balances is extremely worrisome.”, said Ahmed Patel. Reacting to the development, former Union Minister and P Chidambaram said the move is condemnable and said "If anybody is going to monitor the computer, including your computer, that is the Orwellian state. George Orwell is around the corner”. Congress Communication in-charge, Randeep Singh Surjewala said “this time the attack is on privacy”. “Modi Govt mocks and flouts Fundamental ‘Right to Privacy’ with brazen impunity! Having lost elections, now Modi Government wants to scan, snoop YOUR computers? ‘Big Brother Syndrome’ is truly embedded in NDA’s DNA”, he tweeted. Apart from Congress party, the Communist Party of India-Marxist (CPI-M), Trinamool Congress, Samajwadi Party, Rashtriya Janata Dal, Aam Aadmi Party, AIMIM also crticised the government and said Modi government’s move is unacceptable in a democracy.