Rahul calls PM Modi a 'coward', dares him for a debate on national security, Rafale deal 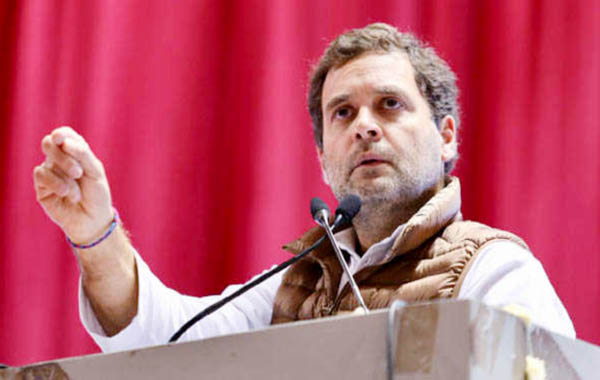 New Delhi, In a scathing attack at Prime Minister Narendra Modi, Congress president Rahul Gandhi on Thursday called him a 'darpok' (coward) and challenged the Prime Minister for a debate with him on issues like national security and Rafale fighter jet deal. Addressing a gathering of party’s minority cells from across the country, the Congress president said if the BJP has any courage, they should make Mr Modi stand with him on the stage for a debate. “When you watch Mr. Modi's face today, you can see fear. He has realised that by dividing the nation he cannot govern the country, and people will remove him, if he does. I challenge the BJP, let Narendra Modi ji debate with me for 10 minutes on stage. He is scared, he is a 'darpok' person,' Mr Gandhi said. Alleging that the RSS is trying to capture all the institutions of the country, Mr Gandhi said that Congress governments in Madhya Pradesh, Chhattisgarh and Rajasthan will remove the persons who have association with the right wing organsation, from the system. "The institutions of this country are not owned by any political party. They are this country's institutions and it is the responsibility of political parties to protect them”, said Congress president and pointed out that four Supreme Court judges came out and said that they are not being allowed to work. “The Judges had mentioned Justice Loya’s case too. This indicates that BJP president Amit Shah is not allowing Supreme Court to function," the Congress president alleged. Taking on the ruling dispensation, Mr Gandhi said the RSS and the BJP are thinking that they are above the country. "The institutions in India do not belong to any party. They belong to the country, and to protect them is our responsibility, be it Congress or any other party. They(BJP) think they are above the nation. In three months, this country will explain it to them that this country is above them," Mr Gandhi said. Criticising the Modi government for its policies, the Congress president asked “what did the BJP do in last five years? Demonetisation has destroyed the country and brought down the GDP by two percentages. Then they implemented the ‘Gabbar Singh Tax’ and badly affected the poor and the middle class”. Referring to the Doklam incident, Mr Gandhi said Mr Modi went to Beijing and had a dialogue with Chinese government without any agenda.“Chinese government realised that Mr. 56 inch is not even four inches. This is Mr. Modi's character. He bowed down to China on the Doklam issue”, he alleged. Mr Gandhi reiterated that once the Congress forms the government at Centre, it will ensure that the country’s poor will get minimum income.