Rahul drags PM Modi into Mallya row: Urges FM to clarify on who 'ordered' him 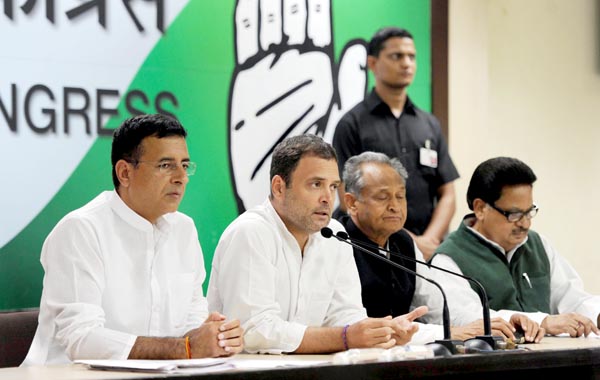 New Delhi, Congress President Rahul Gandhi on Thursday sought to drag Prime Minister Narendra Modi into the murky political row of fugitive businessman Vijay Mallya and urged Finance Minister Arun Jaitley to clarify whether 'someone from top' had ordered him to conceal Mallya's plans to leave India. Addressing an urgent press cofnerence here, Congress President Rahul gandhi, charging Mr jaitley of 'colluding in a criminal running away of fugitive businessman Vijay mallya from the country', demanded his regination from his post. "Arun Jaitley should clarify whether it was all his decision.....or if someone from top ordered him, he should speak out that too. It is an open and shut case. An economic offender tells Finance Minister before leaving for London....Why did not FM inform CBI and ED that he was planning to leave India," Congress president said. 'In this government Prime Minister decides everything......Arun Jaitley listens to the Prime Minister. So Jaitleyji should tell clearly whether he allowed the 'criminal' (Mallya) to flee India ...or there were orders from the Prime Minister," Mr Gandhi said. Mr Gandhi alleged that Mr Jaitley was 'lying' when he said that he just had an informal meeting with Mallya. Rahul alleged that Vijay Mallya and Finance Minister Arun Jaitley were witnessed by Congress leader P L Punia having a discussion in parliament just two days before the fugitive tycoon's flight to the UK, The Congress president fielded senior party leader P L Punia, who was "eyewitness" to the meeting between Mr Jaitley and the fugitive business tycoon Vijay Mallya on March 1, 2016 during the Budget session. "It was a sit down meeting for about 20 minutes in the Central Hall of Parliament," Mr Gandhi said. Mr Punia said: "There is CCTV footage available...there is proof of meeting between Jaitley and Mallya. First they spoke standing and then sat on a bench of the Central Hall of Parliament. It seemed a very intimate meeting". "I challenge Jaitley on this meeting...If I am right, Jaitley has to quit politics and if I am wrong, I will do so....For last two-half-years, Jaitley never mentioned about this meeting," Mr Punia said.