Rahul fires fresh salvo on Modi over Rafale, says if enquiry is ordered, PM will not survive 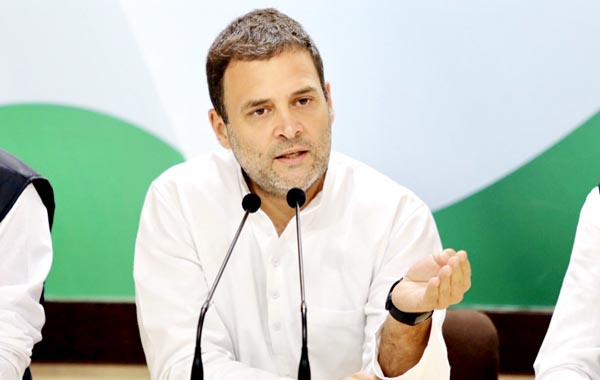 New Delhi, In a fresh attack on Prime Minister Narendra Modi over the controversial Rafale fighter jet deal, Congress president Rahul Gandhi on Friday said the Prime Minister will not survive, if an enquiry is launched and that there is enough material in the public, to name him. Addressing mediapersons here, Mr Gandhi quoted media reports to point out that the Dassault Aviation CEO had stated that HAL was denied the contract because Anil Ambani's company owned land. 'Now, it is clear that Anil Ambani purchased the land with the money given by Dassault. The Dassault CEO is lying and trying to protect a person, who is running the country, and that is Mr Modi,' he alleged.He further alleged that Dassault invested Rs 284 crore in Anil Ambani's company, which has only Rs 8.30 lakh valuation. 'Why did they invest Rs 284 core in a loss making company? Because this is one of the many tranches of money that Dassault paid in kickbacks,' he alleged. Mr Gandhi also said that other than Mr Modi and Mr Ambani, nobody else had information on the deal.'Mr Modi personally took this decision. Mr Parrikar clarified that he had nothing to do with the Rafale deal. If an enquiry starts on this, Mr Modi is not going to survive that enquiry,' he added. Taking up the matter related to CBI, the Congress president said that Modi government removed the CBI chief because he has information on Rafale deal.'There was a cover up and he wanted to start an enquiry, that is why they removed him,' he said. He also questioned that why government is not revealing the pricing of the deal and said that Dassault Aviation's annual report clearly shows the price of the deal. Mr Gandhi also said when he met French President Emmanual Macron, he clarified that the price cannot be part of the secret pact.'Rafale deal was negotiated for a decade that involved several procedures. But one day, the Prime Minister changed everything and gave the deal to Anil Ambani,' he added.