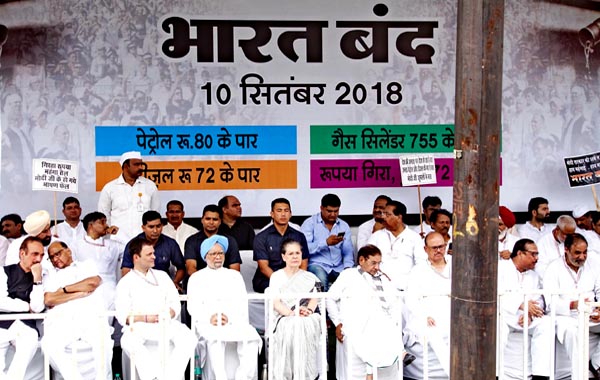 New Delhi, Congress president Rahul Gandhi on Monday led a march by Opposition parties from Rajghat to Ramlila Maidan as part of the Bharat bandh called against hike in petrol and diesel prices. Mr Gandhi, who returned on Monday morning from his pilgrimage to Kailash Mansarovar, paid tributes to the Father of the Nation Mahatma Gandhi at Rajghat this morning before participating in a march by opposition parties to Ramlila Maidan. The Congress president, led an opposition 'dharna' at Ramlila Maidan where former party president Sonia Gandhi, former Prime Minister Manmohan Singh, senior leaders Ghulam Nabi Azad and Ahmed Patel, NCP supremo Sharad Pawar, rebel JD(U) leader Sharad Yadav, Aam Aadmi party leader Sanjay Singh, Sukhendu Sekhar Roy of the All India Trinamool Congress and leaders of many Opposition parties participated. The 'bandh' will see Congress workers across the country hold protests and demonstrations to demand a reduction in excise duties imposed on petroleum products and bringing these products under GST. A total of 20 opposition parties have expressed their support to the protest.These include the SP, BSP, NCP, TMC, RLD, RJD, CPI, CPM , AIDUF, NC JMM , JVM , DMK , AAP, TDP, Kerala Congress (M) and RSP The Trinamool Congress, while supporting the issues raised by political parties that had called for a nationwide shutdown on September 10, however, added that it will hold protest rallies in West Bengal instead of strikes since these lead to a waste of working hour. The Congress had on Thursday called for a ‘Bharat Bandh’ on September 10 against the steep rise in diesel and petrol prices, terming it as a 'loot’ of Rs 11 lakh crore on the common man by way of imposition of excise duties and other taxes of petroleum products. With the Congress garnering support from several opposition parties in the Bharat Bandh, Monday's protest is being seen as another show of strength by the Opposition ahead of the Assembly polls to the states of Rajasthan, Madhya Pradesh and Chhattisgarh and the 2019 Lok Sabha elections. The Congress, which is also demanding that petrol and disel be brought under the GST, has said that this would result in reduction of at least Rs 15 per litre in prices of these products.