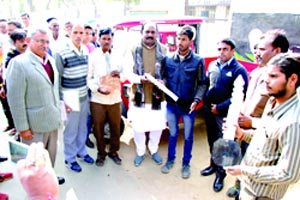 New Delhi , Chief Ministers of Congress ruled states on Monday met Rahul Gandhi to convince him to withdraw his resignation as party president. Punjab Chief Minister Captain Amarinder Singh, Madhya Pradesh CM Kamal Nath, Rajasthan CM Ashok Gehlot, Chhattisgarh CM Bhupesh Baghel and Puducherry CM V Narayanasamy met Rahul at his residence. Talking to reporters after the meeting, Mr Gehlot said, ‘It was a good meeting. We talked for around 2 hours, we conveyed to him the feelings of our party workers and leaders. We hope that he will pay heed to our views and do the right thing.’ Charging Mr Modi of doing politics in the name of the army to win the recent elections, Mr Gehlot said, ‘The BJP misled the country in the name of patriotism. Modi ji did politics hiding behind the Army, He misled people in the name of religion. He did not talk about development, economy and employment. Monday’s meeting follows a spate of resignations in past few days by several Congress leaders and office- bearers to urge Mr Gandhi not to quit as party president. Early in the day, Mr Gandhi, however, reportedly said that he “has already made his stand clear”. It is learnt that Kamal Nath, Ashok Gehlot, Capt Amarinder Singh and Bhupesh Baghel, Chief Ministers of Madhya Pradesh, Rajasthan, Punjab and Chhattisgarh respectively will meet Mr Gandhi later in the day, at his official residence. Mr Gehlot has confirmed the meeting with the Congress president and said, “All Chief Ministers of Congress- ruled states will be meeting the Congress president today at his residence to show our solidarity. Earlier, also we all have stated that we are with Congress president and we own the responsibility of the 2019 debacle”. Mr Gehlot, further said, “We firmly believe that only he can lead the party in the current scenario, his commitment towards well being of our country and countrymen is un-compromised and unmatched”. The meeting comes after a section of workers from AICC functionaries to state leaders, are quitting their posts in solidarity with Mr Gandhi, owning responsibility for the debacle in the recently held Lok Sabha polls. On Monday, Nitin Raut, head of the AICC Scheduled Caste department and UP Congress Committee Secretary Ajay Saraswat ‘Soni’ resigned, claiming responsibility for the party’s Lok Sabha rout. According to party leaders, over 200 Congress workers resigned after Mr Gandhi pointed out that he had resigned to ensure accountability for the party’s defeat. “I cannot ask others to resign too. It is up to them if they want to take responsibility,” he had told in a meeting with Haryana Congress leaders. Earlier, party’s head of the Legal, Human Rights and RTI cell, Vivenk Tankha, AICC general secretary in-charge of Madhya Pradesh Vivek Barbaria, chairman of the AICC Kisan Congress Nana Patole and several other leaders had quit their posts. Mr Gandhi had announced his resignation at the meeting of party’s highest decision making body, Congress Working Committee, after taking responsibility for the Congress’s disastrous performance in the Lok Sabha election. Even as CWC rejected his resignation and asked him to restructure the organisation, Mr Gandhi seems adamant, whichever has put the Congress party in a deep crisis.