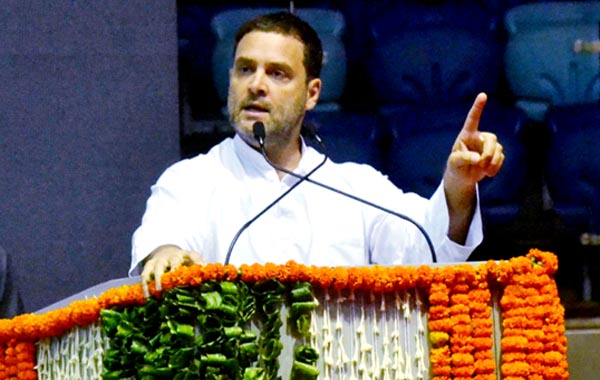 New Delhi, In an attempt to make an outreach to the OBC community, Congress president Rahul Gandhi on Monday charged the NDA government of ignoring them and said that his party has stood by the OBC community for last 70 years and will continue to strive for their rights. Addressing the national convention organised by Congress’s OBC department, Mr Gandhi accused the BJP and right wing organisations like RSS of dividing the country. “Everyone including BJP MPs are afraid to speak. They say that they are sitting in Lok Sabha, but what they want to say will not be heard. Only two three BJP leaders and the RSS are given a hearing”, said Mr Gandhi. He said the Prime Minister was heard saying that there is a dearth of skill in the country. “That is not true. There is no lack of skills among the OBCs. They have a huge potential", he said. Mr Gandhi said the OBC community only lacks capital, not skills. “Why are the banks not open to our farmers and small businesses? There is no dearth of skills amongst OBC communities, but they lack capital”, the Congress president said. He alleged that the Central government has failed to recognise the talent of the people of this country and to prove his claim, Mr Gandhi cited several examples. The Congress president said the soft drink company Coca Cola was invented by a ‘Shikanji’ maker, food chain McDonald’s owner was a ‘Dhabawala’ and Motor vehicle giant Ford Motors was founded by a ‘Mechanic’. “But in India you cannot see a mechanic become the founder of an automobile company. The authorities have failed to recognise the talent of their own people”, he said. Attacking the BJP and the RSS, the Gandhi scion alleged that they are dividing the country and that RSS is working against the interests of the OBC community. “The RSS is a force working to divide the people. It wants to drive a wedge in the OBC community,” he said. Mr Gandhi alleged that under PM Modi’s rule the right to free speech is being curtailed and people are scared to voice their opinion if it’s against the RSS or Mr Modi.  “Today, our nation is a slave of two or three leaders and the RSS” he added. Mr Gandhi also said that the Modi government is protecting the interests of small group of industrialists by waiving their loans of 2.5 crores. “The Modi government is not taking the interest of farmers seriously. While the industrialists are given loan waiver, farmers are ignored leading to their suicide”, he said. He said those people who work hard behind the scenes are not benefited, while others enjoy the fruits of their labour. "You will never see a farmer in Narendra Modi's office. You will see only businessmen there. Under this government, farmers will not get their due”, he said. Mr Gandhi also said while the Congress puts people in the driver’s seat, the RSS is in the driving seat when the BJP rules. He also said the united Opposition will show Mr Modi and BJP President Amit Shah that the country can be driven only by its people.