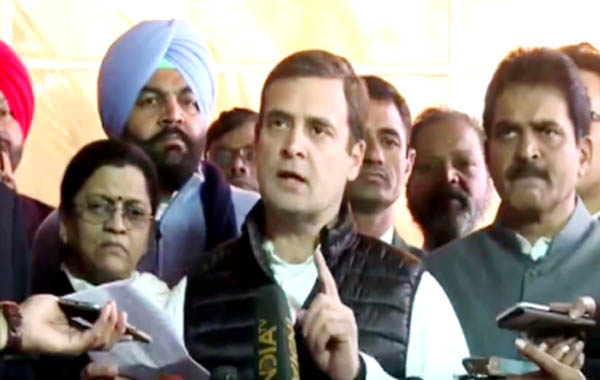 New Delhi, Expressing dissatisfaction with the statement in the Lok Sabha given by Defence Minister Nirmala Sitharaman seeking to clarify on the reply to the Rafale debate on Friday in which she claimed that Rs 1 lakh crore worth of contracts have been given to the Hindustan Aeronautics Limited (HAL), Congress president Rahul Gandhi on Monday charged her of again lying in Parliament on the issue. Talking to reporters after a suo moto statement by the Defence Minister , seeking to set "all doubts to rest" on contracts won by state-run Hindustan Aeronautics Limited (HAL), the Congress president said,’’on Friday, in her speech in the Lok Sabha, the Defence Minister had said that one lakh crore worth of contracts were awarded to HAL. Today, in her suo moto statement, she said contracts amounting to Rs 26,570.80 crore have been signed and that negotiations were going on with regard to Rs 73000 cr worth of orders. So, in effect, she admitted in her statement only Rs 26,570 cr worth of contracts were signed. The Defence Minister clearly lied in Parliament.’’ Mr Gandhi said that in her nearly two and a half hour reply in the Lok Sabha on Friday, the Defence Minister failed to answer the questions posed by him on whether the senior officials of the Defence Ministry and the Indian air force who were involved in the negotiations on the Rafale deal signed during the UPA rule objected to Prime Minister Narendra Modi bypassing the deal and signing a new deal for 36 aircraft.