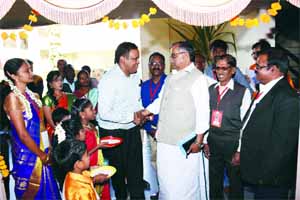 Agencies, New Delhi Taking up the farmers' cause in the Lok Sabha, Congress president Rahul Gandhi on Thursday attacked the Modi government for 'not taking concrete steps' in the Union Budget to provide relief to the farmers. 'Farmers are suffering throughout the country. Suicide are on the rise,' Mr Gandhi said, speaking during Zero Hour. 'Yesterday, a farmer in Wayanad committed suicide due to debt. In Wayanad, bank notices for non payment of loans were given to 8000 farmers, ' said Mr Gandhi who is representing the constituency in the 17th Lok Sabha. He said under the present system, farmers' properties are attached against their bank loans, this is resulting in rise in farmers suicide. 'The farmers in the country are suffering. I would like to draw the Government’s attention towards it. No concrete steps were taken in the Union Budget to provide relief to the farmers,' the Congress president alleged , adding the Budget has treated farmers as inferior to the rich. He wanted the government to direct the RBI to extend moratorium to farmers. Mr Gandhi said Prime Minister Narendra Modi has made a commitment to farmers and he must fulfill his commitment. However, speaking during Zero Hour the Congress president skipped referring to the ongoing political crisis developments in Goa and Karnataka.