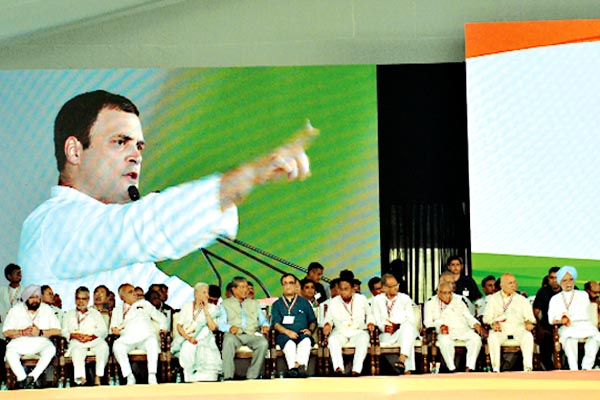 Agencies, New Delhi The Congress on Sunday sounded the bugle for 2019 Lok Sabha elections through a massive Jan Aakrosh Rally in the national capital with Congress president Rahul Gandhi and Chairperson of the Congress parliamentary party Sonia Gandhi lambasting the government for destroying democratic institutions and increasing atrocities against dalits and minorities and violence against women while expressing confidence of the party winning in the coming assembly polls to many states and in 2019. Launching a sharp attack against Prime Minister Modi on issues of women safety, increasing farm crisis, the various bank scams, the Doklam standoff with China, the deal for Rafale fighter jets and “impropriety” of Railways Minister Piyush Goyal,Congress president Rahul Gandhi said the resentment among all sections against the NDA would bring the Congress to power in the coming assembly polls in various states and in the 2019 Lok Sabha elecitons. Addressing the rally, attended by top leaders of the Congress, the various PCC chiefs, the chief ministers of Conrgess ruled states and party MPs, Rahul charged the Prime Minister of failing to fulfill promises made to people during the 2014 Lok Sabha elecitons and turning a blind eye to corruption under his Government and atrocities on dalits, women and minorities. ‘’Whereever I go, people tell me that they are angry against this government. During the last four years, Prime Minister Narendra Modi has been making promise after promise without fulfilling them. India is a country of faith. Faith is built on the foundation of truth. So, now when people listen to the speech, they look for the element of truth in it. For example, at a rally in Karnataka, the PM, standing besides BJP Chief Ministerial face B S Yeddyurappa, who has been to jail, and four other corrupt BJP former Ministers, says that he is fighting against corruption. In such a situation the words of the PM fail to carry any weight with the people of the country. ‘’ The huge ‘Jan Aakrosh Rally, aimed at expressing the resentment of the people against the misgovernance of this government and over the unabated price rise, the increasing violence against dalits, women and minorities and the widespread corruption in the NDA Government,was attended by over a lakh people. Charging the PM of turning a blind eye to the corruption among his ministers, the atrocities of dalits, women and minorities and the massive bank scams in the country,Mr Gandhi said, ‘’when his Cabinet Minister Piyush Goyal fails to declare his company and sells its shares to a power company for Rs 48 crore, the PM remains silent. At the time of demonetisation, the PM said he was doing it to end black money. Now,when Nirav Modi and Mehul Choksi escape from the country after fleecing banks of several thousands of crores of the hard earned money of people, he fails to say a word on it. Be it the Rafale deal or Piyush Goyal’s scams, there is widespread corruption. And ‘desh ka chowkidaar’ is silent.’’