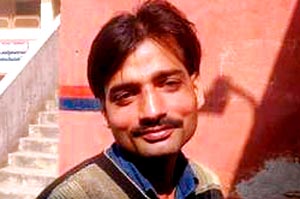 Agencies, Kasganj Inspector General Aligarh Range, Sanjeev Gupta on Monday said Rahul Upadhyay, whose death aggravated the rampant violence across Uttar Pradesh’s Kasganj district, is alive. He confirmed that four people have been arrested for spreading rumours about his death.“Contrary to rumours spread on social media, Rahul Upadhyay is alive. We have arrested four people for spreading false rumours.” Upadhyay was earlier said to have died along with another person named Chandan Gupta in the clashes which broke out in Kasganj on Republic Day. Angered by the false rumours of Upadhyay’s death, the mob indulged in violence over the next three days. On Sunday, more than 30 people were sent to jail on charges of murder and 51 others were detained by police, in connection with the violence that erupted in the vicinity. One person died and two others were injured after a clash broke out between two communities during ‘Tiranga Yatra’ in the district on Republic Day.Both the groups reportedly pelted stones and also fired bullets at each other.