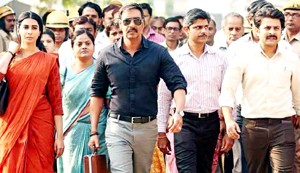 New Delhi, De spite competition from 'Hichki' and 'Baaghi 2', the Ajay Devgn starrer 'Raid' continues with its strong run at the box office and is nearing the Rs 100 cr  mark , trade sources said on Sunday. Directed by . Raj Kumar. Gupta, 'Raid', starring Ajay Devgn and Ileana D’cruz has been registered as one of the biggest movies of 2018. The film, which released on March 16, has managed to garner Rs 94.19 crore at the Box Office in 16 days.Trade sources said that the film continues to be rock steady at the box office despite release of 'Hichki' and 'Baaghi 2'.