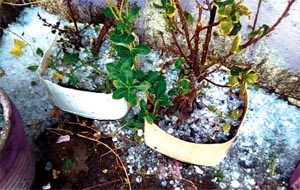 Chronicle Reporter, Bhopal There was sudden change in the weather on Sunday in many districts of the state including Bhopal as strong winds, rains and hailstorm threw life out of gear and caused damage to the standing crop. Heavy rainfall and hailstorm, preceded by thundersquall ripped through Bhopal in the afternoon, throwing life out of gear. While the mercury plummeted at many places after rains and hailstorm, lightning killed two people in Gwalior and Bhind. Several others were injured in other parts of the state. Light rainfall and hailstorm occurred at most places in the state. In Betul hailstorm occurred along with light rainfall. Chicholi, Niwari, Rojhada, Malipura, Nasirabad villages in the district were hit by hailstorm causing damage to the standing crops including wheat, gram, peas, masoor. Besides mango and mahua crops have also been affected. In Shivpuri, thunderstorm and intermittent showers turned the weather cold. But the rains have damaged the crop that had ripened. The harvesting of mustard and gram crops has just started. In Sheopur, hails of the size of chana were witnessed at many places causing damage to the crops. In Sheopur, light rainfall occurred at many places. The sudden rain and hailstorm has led to anxiety among peasants. In Umaria district heavy showers, accompanied with high velocity winds, occurred for nearly half an hour. The rainfall started at about 4 pm. It has caused damage to gram and peas crop.

It has caused scattered to fairly widespread precipitation over North and Central India and the rainfall may be experienced during next 24 hours.The Met Office predicted isolated thunderstorm with hailstorm is very likely over Central India during next 2 days.

Unseasonal rain and hailstorm have caused extensive damage to the standing crops of gram, masoor and tewda in Vidisha district. Heavy thundershower was experienced at many places in the district from 2 pm. The wheat crop that was sowed earlier has probably not damaged but there are apprehensions that it could be affected. In district’s Gulabganj area, the hailstorm occurred for nearly 6-7 minutes. In Lateri light hailstorm and drizzle occurred in the evening hours.

In Chhindwara, lightning during thunderstorm and rain resulted in the death of a dozen cows and three goats. The animals were standing at one place at village Bahuli when the lightning struck.

Crop will be damaged

Agriculture scientist GS Kaushal said the hailstorm will cause damage to the crops. In Biora the hailstorm has harmed the crop which has ripened and is ready for harvest.

In state capital Bhopal there were clouds since morning. The weather changed around afternoon with rains accompanied with strong winds. Heavy rainfall started and strong winds uprooted trees at many places and disrupted power supply at some places. Hailstorm continued for about ten minutes causing extensive damage to the standing crop. The Met Office said about 13 mm rainfall was recorded.