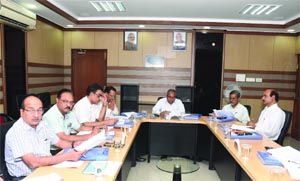 Chronicle Reporter, Bhopal A meeting of Official Language Implementation Committeee was held on Wednesday which was attended by Executive Director AG Ansari and heads of departments and nodal employees looking after the works in Hindi. The meeting decided to hold a special Hindi workshop during the next quarter, issuing orders for new staffers who have performed well, hiking the reward amount for Rajbhasha Shield Scheme 01 and 02, debate on departments of the projects with reference to encouragement scheme, Hindi version on NHDC website samekit Rajbhasha quarterly report and comparatice percentage. Executive Director AG Ansari presiding over the meeting stessed on working continuously for the development of Hindi.