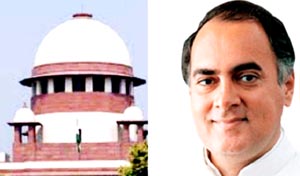 New Delhi, The Supreme Court on Wednesday adjourned for a month a plea filed by one of the convicts, AG Perarivalan, seeking a direction to expedite the probe of the Central Bureau of Investigation's Multi-Disciplinary Monitoring Agency in the larger conspiracy behind the assassination of late former premier Rajiv Gandhi . Led by Justice Ranjan Gogoi and also comprising Justice Ms R Banumathi, the division bench posted the case for further hearing after four weeks, as the Centre sought adjournment saying that the Investigating Officer is admitted to hospital. Perarivalan had also sought a direction from the apex court that there should be a proper investigation of a larger international criminal conspiracy angle involved in the assassination on May 21,1991, at Sriperumbudur, near Chennai. In May 2016, the Tamil Nadu government had written seeking the Centre’s opinion on release of the seven convicts - Sanatan, Murugan, Robert Pais, AG Perarivalan, Nalini, Jay Kumar and Ravi Chandran. The Union of India is still sitting on it, the dispensation submitted in the apex court. The Centre had moved the Supreme Court against a resolution carried in 2014 by the Tamil Nadu assembly which decided to release the seven assassins.