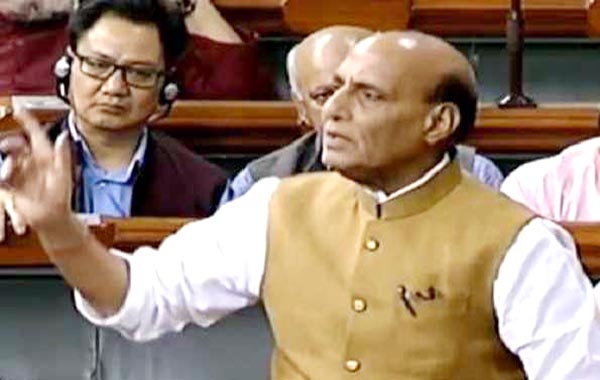 New Delhi, Home Minister Rajnath Singh on Friday ridiculed Opposition parties for bringing a No-Trust motion against their government and said those parties which brought this motion, have immense political contradictions. 'How much faith people have on these parties will be exposed the moment this motion is put to vote. Several parties have come together to move this motion, but among themselves they don't have faith in each other,' Mr Singh said in his intervention during No-Trust debate in the Lok Sabha. Mr Singh, who was BJP president on the eve of 2009 elections, pointed out that the BJP never brought a No-Confidence motion against the Manmohan Singh government because it was well known that the Congress led UPA were pretty comfortable in numbers. Referring to Opposition parties making efforts to cobble together an alliance before the next general elections, he said the moment they start discussing about leadership, such a coalition will collapse forthwith. He said there was no point in showing lack of confidence in the government headed by Prime Minister Narendra Modi. The Home Minister told the Opposition members 'against whom you are bringing this No-Confidence motion, here is a Prime Minister on whose appeal a large number of people have given up the subsidies on cooking gas.' Mr Singh, who represents former prime minister Atal Behari Vajpayee's constituency Lucknow, said there was a time when even Late Rajiv Gandhi had mocked BJP for being only two-member party in the Lok Sabha. 'They use to call us, 'Hum do, hamare do' meaning Mr Vajpayee and Mr L K Advani and the fact that we had only two MPs in Lok Sabha,' he said, adding that after three decades, the BJP is in overwhelming majority. 'Such is our strength that no single party can bring No-Confidence motion against us so they had to unite to do this,' the Home Minister said and maintained that those in public life should stay away from 'ahankaar' (arrogance).