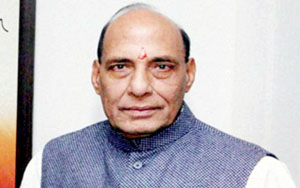 New Delhi, Union Home Minister Rajnath Singh will inaugurate the National Traders Conclave here on July 23.The three-day conclave is being organized by the Confederation of All India Traders (CAIT) from July 23 to July 25. About 1,500 trade leaders from across the country will participate in the conclave, a CAIT release said here on Saturday. Interim Finance Minister Piyush Goyal will also address the conclave on the opening day, it added. The Conclave will discuss a host of issues including simplification of GST, Walmart-Flipkart deal, regulator for e-commerce, National Trade Policy for retail trade among others. According to CAIT Secretary General Praveen Khandelwal, cabinet ministers including Smriti Irani, Nirmala Sitharaman , Suresh Prabhu, Prakash Javedkar and Hardeep Singh Puri will also address the conclave in different sessions on July 24 and July 25.