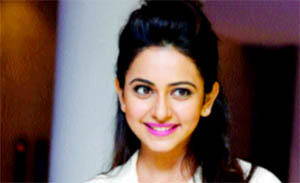 Actress Rakul Preet confessed that she is a workaholic and likes to work for long hours.The actress is working on a Hindi and Tamil film at the same time — which has left little time to spend on herself. “Due to our work commitments and schedules, we need to stretch ourselves a little and work non-stop round the clock,” Rakul said in a statement to agency. “Especially for me as I’m juggling between shooting a Tamil film and Hindi film simultaneously. But being a workaholic, I am very happy as long as I am working. Long hours don’t bring me down,” she added. According to a source, Rakul was shooting night shifts in Chennai for three days for her Tamil film and wrapped up a brand shoot in Hyderabad in the daytime. Last week, she landed after a night shoot early morning in Mumbai and headed straight to the film set of her next Hindi film — which is a romantic-comedy with Ajay Devgn. Rakul has also featured in Telugu films. In Bollywood, she has done “Yaariyan” and “Aiyaary”.