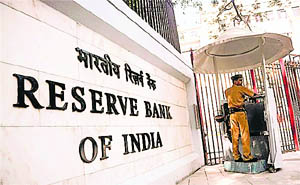 Agencies, Mumbai, The Reserve Bank of India (RBI) has highlighted the need to revaluate issues relating to fiscal federalism in a post-GST framework. In a growing economy like India, which has recently undertaken structural tax reforms like the GST, inherent buoyancy could lead to more revenues for all levels of government from a medium- term perspective. It is also crucial that states are able to judiciously allocate freed untied resources to desired sectors for long-term growth with minimal leakages, RBI has said in its report on State Finance released on Thursday. RBI said a binding constraint emanated from the resource crunch due to the creeping encroachment of ceses and surcharges into the divisible pool of gross tax revenue. These revenues had gone up from 9.3 per cent of gross tax revenues in 2014-15 to around 14.2 per cent in 2018-19 (BE). Accordingly, states’ share in centre’s gross tax revenue (including cess/surcharges) fell to 34.6 per cent in 2017-18 (RE) from 35.4 per cent in 2016-17. The fourteenth Finance Commission had enhanced the fiscal flexibility available to states to pursue their own development models by enlarging the unconditional transfers to states by 10 per cent of the divisible pool. RBI said Revenue mobilisation remains a key ingredient to attain fiscal targets. In 2018-19, states’ revenue capacity may be augmented with the stabilisation of GST and the consequent expansion of tax base and efficacy. The cushion provided by compensation cess from the centre for any interim shortfall should smooth state finances. With the implementation of the e-way bill for inter-state movement of goods from April 2018, states could also strive for generating more revenues by locking in efficiency in tax administration.The states could benefit from improving their budgetary forecasting techniques and fiscal marksmanship. Getting their bonds rated on the basis of prudent fiscal performance and reliance on credible medium-term forecasts could provide incentives for such changes as better ratings will bring the deserving states the benefit of lower borrowing yields. If financial markets differentiate risks more discerningly across states through yield differentials, improvement of fiscal discipline by states could in fact become an imperative. RBI said in recent years, signs of pressures on the fiscal position of states have re-emerged. While states budgeted a gross fiscal deficit to gross domestic product (GFD-GDP) ratio of 2.7 per cent in 2017-18, revised estimates reveal GFD-GDP ratio of 3.1 per cent. The deterioration was located in the revenue balance. In contrast, the capital account has helped to contain the GFD While states have projected a revenue surplus and a lower consolidated GFD of 2.6 per cent of GDP in 2018-19, 11 states have budgeted for fiscal deficits above the threshold of 3 per cent of GDP. With states continuing announcements and rollout of farm loan waivers, the budgeted GFD could be at risk, and the additional borrowing requirement could produce a concomitant impact on the already elevated borrowing yields. Risks, RBI said, are also likely to emanate from possible higher pre-election expenditure in more than 10 states and implementation of the balance pay commission awards, particularly to the extent that they are not fully provided for under the budgeted expenditure. Capital expenditure may have to bear the brunt of the fiscal correction, as it has done over the past two years. With a combined GFD to GDP ratio at about 6.4 per cent vis-à-vis the FRBM Committee’s medium-term target of 5.0 per cent, private investment risks getting crowded out of the finite pool of financial resources. Moreover, funding these persisting large public sector deficits through enhanced borrowings runs the risk of feeding an unsustainable spiral of higher debt repayments pre-empting productive expenditures and inducing even higher debt levels.