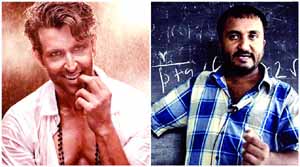 Hrithik Roshan who turned a year old yesterday received birthday wishes from all quarters. While one would expect Bollywood biggies to pour in wishes, mathematician Anand Kumar too celebrated the actor’s birthday with Super 30 team in a unique way. The actor who will be next seen starring in his first biopic based on the life of Anand Kumar shares a cordial bond with the mathematician. Anand Kumar celebrated the actor’s birthday along with the team of Super 30 and members of Hrithik Roshan’s fan clubs. For his first ever biopic, Hrithik Roshan will be seen slipping into a Patna based Math teacher’s character for Super 30. The actor will be seen portraying a North Indian (Bihari) role for teh first time and the fans are more than excited to witness the unusual character of Hrithik. The actor who has time and again surprised audience and critics alike with his versatile portrayal of varied roles has got everyone intrigued for his upcoming film Super 30. One of the most anticipated films, Hrithik Roshan fans are super excited to watch their beloved character as a maths teacher. Helmed by Vikas Bahl, the film will showcase the life of Patna based mathematician, Anand Kumar, who trains 30 deserving, economically backward students for IIT-JEE the entrance exams of IIT each year with commendable success rate.