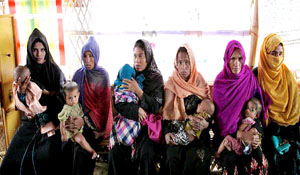 United Nations, Despite record numbers of people fleeing conflict and natural disasters globally, vital health services have been largely able to cope, the United Nations refugee agency has said; although communicable diseases, anaemia and stunting remain areas of concern. The annual review of health cover in dozens of emergencies and ongoing operations, published by the Office of the UN High Commissioner for Refugees (UNHCR), depicts the trends in the agency’s 37 key operations. In 2017, a year in which wars and persecution drove global forced displacement to a new high, the mortality rate for children under five in post-emergency situations averaged 0.4 deaths per 1,000 refugee children every month, sustaining the declining trend observed since 2011. There have been improvements in reproductive health service cover. Out of a total of nearly 97,000 births, nine out of 10 deliveries were conducted by a skilled health worker – a 25 per increase from 2016. Health facilities for refugees and displaced people also hosted more than eight million clinical consultations last year in 21 countries, which is a 10 per cent increase from 2016. Nine in 10 of the refugees who were treated suffered from at least one form of communicable disease, UNHCR said, highlighting the importance of investing in prevention. Some 65 per cent of UNHCR’s refugee operations reported measles vaccination coverage rates among children under one year of age, above 90 per cent – against an international standard of above 95 per cent. Overall, more than 160,000 children in this age group were vaccinated against measles in routine programmes; a 15 per cent increase from 2016. Access to HIV treatment was sustained with over 10,000 refugees enrolled in HIV treatment programs a threefold increase from 2015. Overall, 62 per cent of the surveyed refugee sites met the global acute malnutrition standards, showing a slight improvement from 2016. Despite the largely positive results, there is still significant concern about continued high levels of stunting – or impaired growth – which in children under-five, was found to be at an acceptable level in only a quarter of managed sites. Only three per cent of surveyed sites met anaemia standards with prevalence below acceptable standard of 20 per cent. Given the record levels of forced displacement globally this year, UNHCR’s budget requirements are at a record high of $8.275 billion. However, as of mid-2018, only 33 per cent of these needs are funded.