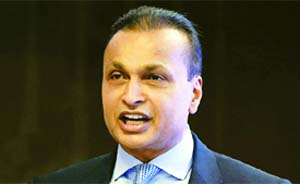 Agencies, Mumbai Anil Ambani group company, Reliance Infrastructure Limited on Monday said that company has won an arbitration award of Rs 292 crore against the government of Goa. The Arbitration Tribunal, in its award on February 16, 2018, has ordered Government of Goa to pay Rs 292 crore to Reliance Infrastructure Limited by April 15, 2018., company said in filing with BSE. The Tribunal has also ordered payment of interest at 15 percent p.a. on the total award amount if Government of Goa fails to pay the entire award amount by the deadline. Joint Electricity Regulatory Commission had constituted the Tribunal under the new rules laid down in 2015. Starting in January 2016, the proceedings of the tribunal were held for about two years and all pleadings and arguments by both the parties were completed in 12 sittings. The need for arbitration arose due to prolonged non-payment of dues by the Goa Government towards supply of electricity by Reliance Infrastructure Limited from its 48 MW Goa Power Plant in Sancoale. The total outstanding dues along with interest as on October 31, 2017 amount to Rs. 278 crore. The Tribunal has also awarded Reliance Infrastructure interest from October 2017 till the date of the Award, which amounts to Rs. 14 crore. The contention of Reliance Infrastructure Limited that the rate of energy for the period from June 2013 to August 2014 was based on the varying prices of fuel and dollar exchange rate as was agreed to by the Goa Government, was upheld by the Tribunal. The contention of Goa Government that the rated capacity of the plant was to be downrated, right from the second year of operation,for calculation of fixed charges since the parties had already agreed against downrating in 2007, was rejected by the Tribunal, it added.