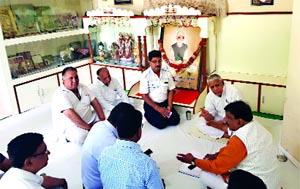 Chronicle Reporter, Bhopal Mayor Alok Sharma took stock of development works at Sant Hirdaram Sahibji’s Samadhi Sthal, Vishram Ghat at Sant Hirdaram Nagar and reviewed other works. He directed to install sheds at Samadhi Sthal so that the people are not inconvenienced. He also issued instructions for asphaltation of the approach road to CHI School in Gandhi Nagar. Senior social workers Hero Gyanchandani and Ramesh Hingorani welcomed the mayor at Samadhi Sthal. The mayor also issued orders for the repair of water pipeline near railway line. Sant Siddha Bhau urged the mayor for the rehabilitation of small traders and vendors whose shops on Jawahar Marg were demolished during anti-encroachment drive. The mayor informed that they will be allotted shops at alternative places. Mayor also had a look at the Vishram Ghat renovation works at a cost of Rs 4 crore. Renovation of Sant Hirdaram Samadhi Sthal and Vishram Ghat in now in full swing.