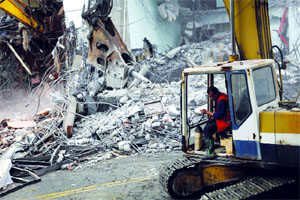 Agencies, Taiwan Rescue operations after a devastating 6.4 magnitude earthquake that rocked Taiwan’s tourist area of Hualien this week started to wind down on Friday, with the death toll at 10 and seven people still missing. The earthquake hit the eastern coastal city of Hualien just before midnight on Tuesday, toppling four buildings, creating large cracks in roads and causing panic among Hualien’s roughly 100,000 residents. More than 270 people were injured.Rescue efforts since then have been hampered by more than 200 aftershocks island and emergency services personnel worked through the night, combing through rubble in the rain and cold as they searched for survivors. Efforts on Friday were focused on finding seven people still missing from a 12-storey residential building that was left tilting at a 45 degree angle.The government said extreme displacements at the building were making the search for survivors difficult.“The space for our operations is small, so the search and rescue progress can be slow,” it said in a statement. Two people from Hong Kong with Canadian citizenship were among the missing, as well as five nationals from mainland China.Power was restored to all affected areas in Hualien by Friday, although 8,500 households were still without water. The government said it was taking fresh steps to push forward a revision to its building act that it hoped would help limit damage in the future.The interior ministry said on Friday the government had already revised Taiwan’s construction law on Jan.30 to strengthen investigations of current building structures and the inspection of completed projects. The revision would also invite third parties to participate in building assessments, it said. The Cabinet is expected to meet at the end of this month to discuss the revision.The government also said it would take measures to speed up the reconstruction of old buildings, with an emphasis on ensuring that they are made earthquake-resistant. It said it would work with relevant groups to help residents address the safety of other structures in affected areas.“At every stage, the central government will fully assist local governments to complete the related work of doing restorative construction work,” it said.