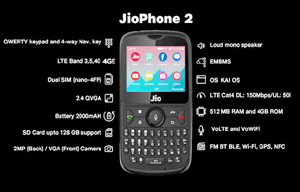 Agencies, Mumbai, Mukesh Ambani-owned Reliance Industries on Thursday unveiled ‘Jio GigaFiber’, the much-awaited fibre-to-the-home (FTTH) broadband services. The announcements were made at the 41st annual general meeting (AGM) of Reliance Industries.JioGigaFiber broadband will to come with a set top box for TV. It will have enabled voice command feature for TV. Besides, it will also have a TV calling feature. Akash and Isha Ambani, the son and the daughter of Ambani, meanwhile, launched JioPhone 2 with advanced features. The new phone will be available for Rs 2,999, effective from August 15. The phone will be available along side the JioPhone, already available in the market. JioPhone is a feature phone, launched by Reliance Jio last year with an effective price of ‘zero’. The company said it is targeting 100 million users on JioPhone in the shortest time. “JioPhone generates more than 20 crore voice commands every month,” Isha Ambani said. She said the company will also launch three of the world’s most popular apps - Facebook, Whatsapp and Youtube on JioPhones. Addressing Reliance Industries’ shareholders, CMD Mukesh Ambani said JioPhone Monsoon Hungama will start from July 21, where the existing customers can replace their old Jio phones with the new one for Rs 501. The registration for JioGigaFiber broadband will too begin from August 15, either via MyJio or Jio.com. The company will start rolling out service in localities, evincing highest interest. Thus far, the service was being offered under a preview offer, wherein users were offered high-speed internet up to 100 Mbps for 90 days, along with a monthly data quota of 100 GB. The company was charging no installation charges, but taking a refundable security deposit of Rs 4,500 for the ONT device (GigaHub Home Gateway). The high download and upload speeds enable UHD, Video conferencing and variety of camera application usage and experience seamlessly. On consumption of 100 GB of data quota within a month, preview data users were being offered a complimentary data top-up of 40 GB via MyJio App or through Jio.com. Jio has enabled Reliance Industries to strategically reinvent itself as a tech platform company, Mr Ambani said, adding that Digital platforms have become new-age factories, he said.