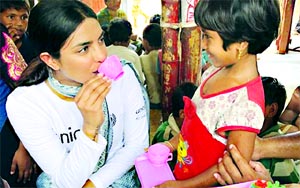 Agencies, Dhaka Noted Indian actress and UNICEF goodwill ambassador Priyanka Chopra has nudged the world to give more to Rohingya refugees in an emotional appeal. “Every child deserves a future, an opportunity to contribute to humanity,” she said at a news conference in Dhaka on Thursday after her four-day visit to Cox’s Bazar, now home to the world’s largest refugee camp. “There’s so much more to be done,” she said referring to the monsoon bearing down on Rohingya refugees. “Refugee children are the world’s responsibility because they don’t have anywhere to go. They don’t have anything they can call their own.” Chopra warned that a generation of children is vulnerable to violence and without any education. “Do we need any more hatred?” “What if that happens to your own children? So it’s the responsibility of the globe, global citizen.“All the children I work for are my children,” she said. Chopra said she saw a 7-year-old boy drew football fields with helicopters spraying bullets on children playing football, firing of rocket launchers on their homes, and cut off body parts when the Rohingyas crossed the border in August and September last year. “These are children of 5 or 6 years old. That’s what they remember. That’s what they know. “Six months later, his drawings were – Bangladesh, sunshine, greenery, teachers, roofs. And that just happened in six months. Because there was humanity shown to them,” she said, referring to the UNICEF work at the refugee camps. Chopra praised the Bangladesh government for showing sympathy to the refugees by opening up its border for the Rohingyas. Earlier in the day, she met Prime Minister Sheikh Hasina. She said they spent a lot of time talking about the condition of the children at the refugee camp. She started her speech by asking, “How are you?” in Hindi. She said she can say only one thing in Bangla: “Tomar naam ki? (What’s your name?)” and “Rasogolla”, the famous Bengali sweets. She thanked all the organizations that have come forward, especially UNICEF, in aid of the refugees. “They need your money, time, compassion. You all have these,” she added in the appeal. Chopra said when she looked through the eyes of the Rohingya children she saw they “have nothing…no food, clean water, shelter for monsoon “What will happen to those shacks?” she asked. When a journalist asked for her comments about the atrocities the Rohingyas faced in Myanmar, the Indian actress said, “I am here on behalf of the children. I am too small to speak about political situation.” Instead of focusing on the violence of the past, we need to see what we can do in the future,” she added. Earlier she went live on the social media from a Rohingya refugee camp, urging the international community to come forward in helping refugee children across the world. Chopra said the global community must come forward to address the issue as Rohingya children are living in a condition where none of their basic rights to food,safe water, shelter proper sanitation and education can be fulfilled.