Rosamund Pike wanted to play Mary Poppins in the sequel 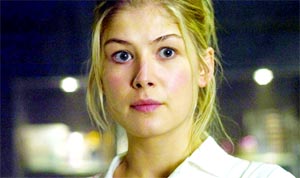 Actor Rosamund Pike said she wanted to play Mary Poppins in the franchise reboot and also reached out to director Rob Marshall to show her interest. The 39-year-old actor said she thought writing to the filmmaker to let him know she was interested in playing the magical nanny in “Mary Poppins Returns” would help her land the role, which later went to Emily Blunt. “(I wrote to him) ‘Just so you know, I would really love to be Mary Poppins’. It’s worth putting your hat in the ring for things sometimes,” Pike told Total Film magazine. The actor will be next seen playing a German terrorist in Jose Padilha’s “Entebbe”.She said she wishes to work with the directors who are passionate about their work.“I really want to know the director has to make the film. It’s not just a job. I felt that very strongly with Jose for ‘Entebbe’. You want to know, does this person have a strong take? Is it in their blood?” Pike added working on “Hostiles” was “traumatic” traumatic experience for her. The actor, who played a mother who lost her family in a violent attack in the film, said, “I’ve had to live in a very, very dark place for a while. It was really traumatic. “It felt very real. When I re-watch that, I feel it was something I lived, rather than something I acted in,” she said.