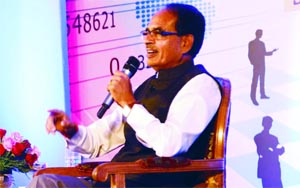 Chronicle Reporter, Bhopal Chief Minister Shivraj Singh Chouhan has said that the Lok Sabha and Vidhan Sabha elections should be held simultaneously. For this an amendment should be made in the Constitution. This will give time to the ruling political parties to make development schemes and implement them effectively. He said that frequent elections result in waste of both money and energy. Holding elections of panchayats, urban bodies, cooperative societies, water consumer organizations and other organizations simultaneously will be considered on an experimental basis. Chouhan was addressing a Business Leaders’ Summit organized by a news channel here today. The Chief Minister said that Rs one lakh 10 thousand crores will be spent to increase irrigation capacity. Irrigation capacity will be increased to 80 lakh hectare in the next five years. He said that Madhya Pradesh has witnessed remarkable development. Per capita income has increased. The growth rate has been in two figures in the last 13 years. Chouhan said that 65 percent population of the state depends on agriculture. Farmers have made remarkable agriculture production. Agriculture production is no longer a problem. Now fetching fair price to the farmers is a challenge. For this better alternatives like Minimum Support Price, Bhavantar Bhugtan Yojana and Mukhya Mantri Krishi Samriddhi Yojana have been made available. He said that the Centre is considering implementation of Bhavantar Bhugtan Yojana in the entire country. On the Basmati rice issue the Chief Minister said that the state’s farmers are producing Basmati rice since 1908. Fifty percent of the Basmati rice being exported to Canada and America is being produced in Madhya Pradesh. He said that a few exporters and particularly Pakistan does not want the Basmati rice produced by Madhya Pradesh to acquire global identity certification. We will fight for the Basmati producing farmers will full force and will be victorious. Chouhan said that by raising the partnership of the state in central taxes from 32 percent to 42 percent the revenue base of the states has strengthened. The state has received Rs one lakh crore in central taxes and other schemes. He said that the Chief Minister’s Unorganized Sector Labourer Welfare Scheme is the biggest social security scheme of the country. Labourers will be provided free treatment facility besides free education of their children from Class I to PhD. They will be given pucca houses by 2022. They will be owners of residential land. On complete ban on liquor, the Chief Minister said that this is a subject connected with social and public awareness. It can be totally abolished by making people aware of its ill effects. On law and order system he said that government is stern on anti social elements. Citizens should cooperate in teaching such anti social elements a lesson. Chouhan said that decision has been taken to entrust the work of running nutritious meals manufacturing units to women self help group federations. In the next six months the federation of women self help groups will be in a position to run these units.