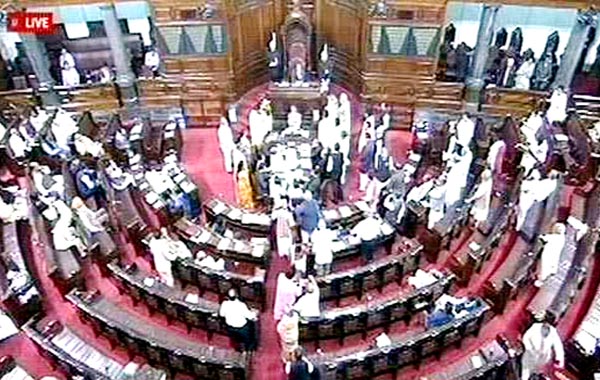 New Delhi, Rajya Sabha was adjourned during Question Hour on Tuesday till 2 pm over black money issue shortly after Union Finance Minister Piyush Goyal informed the House that deposits by Indians in Swiss banks had come down by 34.5 per cent last year, Chairman M. Venkaiah Naidu adjourned the House after Trinamool Congress members trooped into the Well of the House raising slogans during Question Hour taking umbrage to Mr Goyal’s remarks. While raising a supplementary to a question regarding information on black money from Switzerland, TMC member Sukhendu Sekhar Roy asked from the information received about money in Swiss banks how much was black money and when will people get Rs 15 lakh in their banks. To this the Minister said if the member was privy to information on black money he could share it with the government. At this TMC members got up in their seats and said the Minister had cast aspersion. Mr Goyal said he had not cast any aspersion and only asked the member to share information if he was privy to any. Mr Naidu asked Mr Goyal to restrict himself to facts but by then TMC members started moving to the Well of the House raising slogans like ``kaladhan wapas lao’’. At this Mr Naidu adjourned the House till 2 pm.Earlier replying to supplementaries, Mr Goyal said there is information of over 4000 deposits for which the Indian government had sought information from the Swiss government. Mr Goyal said the steps taken by the government in its crusade against black money, including black money stashed abroad, had led to positive results including reduction in deposits. India had signed the Multilateral Competent Authority Agreement (MCAA) with Switzerland pursuant to which the Automatic Exchange of Information (AEOI) is activated between the two countries for sharing of financial account information effective from January 1, 2018. Accordingly, India will receive the information of financial accounts held by Indian residents in Switzerland for 2018 and subsequent years, on an automatic basis.