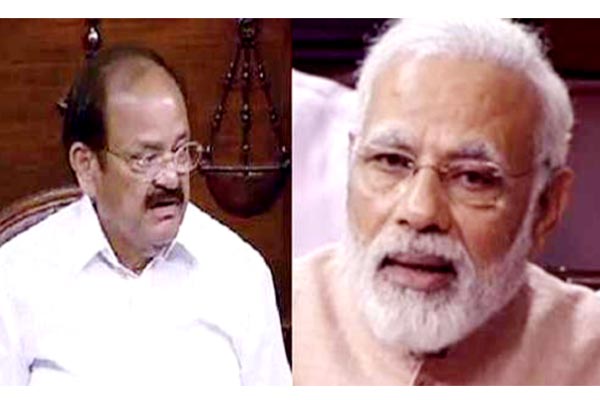 New Delhi, The Rajya Sabha on Wednesday bid farewell to the retiring members with Chairman M Venkaiah Naidu and Prime Minister Narendra Modi hailing their contributions to the House and wishing them all the best for future. In his farewell speech to the retiring members, Mr Naidu, expressing concern over repeated disruptions in Parliament, said he is “deeply disturbed”?by the way some members of Rajya Sabha were conducting themselves. The Chairman, becoming emotional while talking about the repeated disruptions in Parliament, said that he was very hopeful?and came with great expectations?as the chairman of the House. "All parties are equal to me as chairman. I?have nothing against anyone,’’ Mr Naidu said.The Rajya Sabha chairman also noted the low representation of women in the Upper House. “Providing adequate representation to women in Parliament and legislature has to be accorded priority.” he said. In his farewell address to the retiring members, the PM said, "all those who are retiring from the House today have their own significance and each of them tried their best to contribute to the glorious future of this country. They have worked to the best of their ability for the brighter future of the nation. The Nation can never forget their contribution. I wish you success in future.’’ The Prime Minister said it is unfortunate that the retiring members will not be a part of Parliament, when the long due decision on Triple Talaq is taken."It would have been the outgoing members’ wish to leave the House after being part of monumental decision of passage of the Triple Talaq Bill. But that did not happen due to the House’s fault,’’ the PM said. Lauding the contribution of Prof PJ Kurien, who is also retiring, as Deputy chairman, the PM said, "everyone will remember Professor Kurien’s smiling face, even when he is admonishing others. He must be lauded for making an effort to run the proceedings of the house even in the mist of uproar.’’ The Prime Minister said that the Upper House, with senior Members, has a unique significance.‘’It plays a key role in policy formulation,’’ he added. The Prime Minister made a special mention of many retiring MPs and their contributions.He assured the retiring members that the doors of Parliament and PMO are always open for them, and urged them to continue sharing their thoughts on vital issues of the day. Bidding farewell to the retiring members, Leader of the Opposition in the Rajya Sabha Ghulam Nabi Azad said that leaving the House did not mean the members were saying goodbye to politics. ‘’We will continue to meet these members in the Central Hall even a after they have retired,’’Mr Azad said. Speaking about the protests by the Opposition, he said that the protests were to raise the issues concerning the people of the country like the farmers distress, the bank scams and other issue. Without mentioning BJP?directly, he said that even the party protested in Parliament even when it was in Opposition."Today we are in the opposition and raising uproar on various issues. When they were in the opposition, they protested on issues of public concern. I would like to say thjat it is Parliamentarians and legislators who have kept Democracy alive by raising issues of concern of the poor, the backwards and the underprivileged in both Hosues,’’Mr Azad said. The Congress leader named Naresh Agarwal and Bhupinder Singh for playing an important role in Rajya Sabha. He also congratulated Finance Minister Arun Jaitley, Ravi?Shankar Prasad and Jaya Bachchan amid other leaders for their re-election to Rajya Sabha.