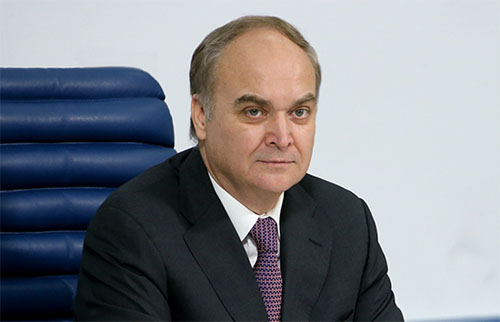 Agencies, Washington Russia may be forced to deploy missiles capable of striking the entire European continent if the United States deploys such weapons in the region, Russian Ambassador to the United States Anatoly Antonov said during remarks at the Stimson Center. "We are very much concerned that after the decision of the United States to withdraw from the INF [Intermediate-Range Nuclear Forces Treaty], missiles could be deployed on the territory of European allies," Antonov said on Monday. "We will be forced to deploy our missiles, and here you will see that the whole territory of European countries will be covered." In February, US Secretary of State Mike Pompeo announced that the United States had suspended its obligations under the INF Treaty and triggered the six-month withdrawal process unless Russia comes back into compliance with the pact. The following day, Russian President Vladimir Putin said that Moscow had suspended its participation in the treaty in response to US actions. Antonov said during his address the United States’ withdrawal from the INF Treaty affects the security of all European countries, including the security of Russia. The Russian ambassador emphasized the need to save the INF Treaty for the purpose of maintaining arms control, and noted that the New START Treaty expires in two years.