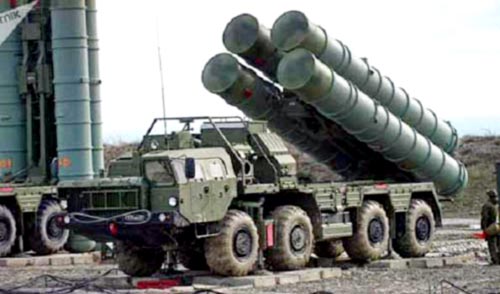 Washington, President Vladimir Putin's two-day visit to India from Thursday will be closely watched by United States in view of its objections on India’s plans to purchase five S-400 missile systems from Russia, observers assert. In 2016, Russia had signed an agreement with India for purchase of five S-400 Triumf systems for 5.8 billion dollars. The deal had raised eyebrows in US and threatened India with sanctions. America believes the S-400 could access sensitive military technology.The missile can even track US-built F-35.US had declared that countries trading with Russia’s defence and intelligence sectors would face automatic sanctions under Countering America’s Adversaries Through Sanctions Act that President Donald Trump signed into law last August. The law was formulated by the US to punish Putin for the 2014 annexation of Crimea from Ukraine, 'involvement' in the Syrian civil war and 'meddling' in the 2016 US presidential election, according to US media reports. US is implementing CAATSA act vigorously as in September it imposed sanctions on China’s military for its purchase of combat fighters as well as the S-400 missile system it bought from Russia, Arab News reported. However, a later amendment to the act allows the US President to grant waivers on a case-by-case basis. India argued for a waiver in July and again in September on the grounds that the absence of the S-400 would adversely affect its military abilities, and that it was significantly reducing its dependence on Russian military hardware. More than 80 per cent of India’s military equipment was of Soviet origin during the days of the Cold War, but since its breakup, New Delhi has diversified its weaponry. The US is one of its top arms suppliers, closing 15 billion dollars worth of deals in just the last decade. Putin’s visit to India will be watched closely by Beijing too as his trip comes at a time when Russia and China are strengthening ties with each other, a report of South China Morning Post said. In September, Russia conducted Vostok 18, its largest military exercise since the end of the Cold War, on its eastern border. It also invited China and Mongolia to participate in the war games. However, in the first quarter of 2018, the trade between India and China increased by 30 per cent. Both the Asian countries seems to be aiming to reduce "US influence as a global power'. Moreover, as the trade war between China and US has taken an “ugly turn” with both imposing duties on each other products, Beijing might be willing to further increase its trade with New Delhi. However, the US has recognised Indo-Sino trade boost and is trying to strengthen Washington-New Delhi relations. In March, the US formally changed the name of its Pacific Command to the Indo-Pacific Command, with defence secretary James Mattis stressing that this was in keeping with the country’s strategic focus spanning both the Pacific and Indian Oceans–from Hollywood to Bollywood.Russia, too, has favoured the use of the term.However, analysts assert that India seeks a ‘multipolar’ world. Prime Minister Narendra Modi’s meetings with Chinese President Xi Jinping in Wuhan, with Putin in Sochi, India’s participation in the 2+2 dialogue with the US, and its S-400 defence systems deal with Russia are emblematic of this multipolarity, a media report said. The S-400, a missile defence system, is intended to act as a shield against incoming ballistic missiles. It is the world’s most dangerous operationally deployed modern long-range surface-to-air missile system, and is considered much more effective than the Terminal High Altitude Area Defence system developed by the US. Moreover, it integrates multifunction radar, autonomous detection and targeting systems, anti-aircraft missile systems, launchers, and a command and control centre. It can be deployed within five minutes, and is capable of firing three types of missiles to create a layered defence. It can engage all types of aerial targets. In 2007, the S-400 was made operational. It was deployed in Syria in 2015 to guard Russian and Syrian naval and air assets. Units have also been stationed in the Crimean peninsula.